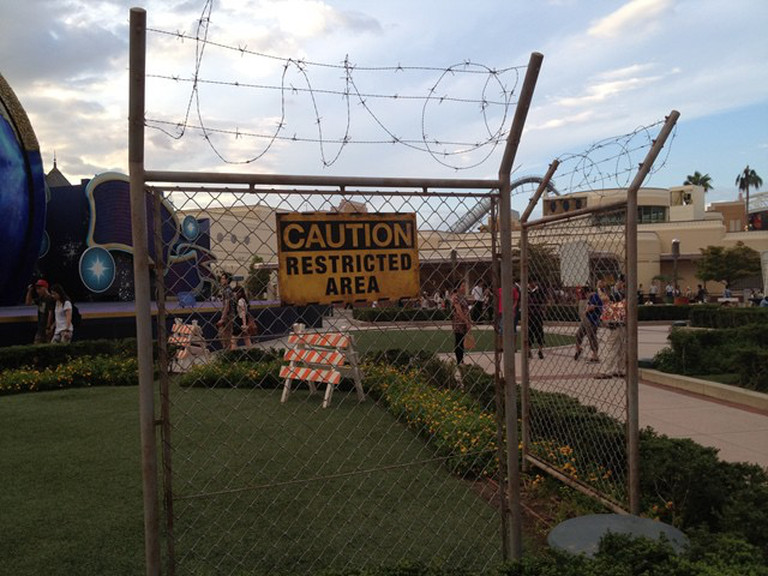 Capcom and Universal Studios Japan have collaborated on a limited time Biohazard-themed attraction at the theme park located in Osaka, where Capcom Japan’s headquarters are also located. Offered from 6PM to 9PM on Fridays, Saturdays and Sundays in the period spanning September 15 through November 11, 2012, the attraction mixes a glorified indoor haunted house with an outdoor zombie parade that takes place in the New York area that has been transformed into a loose replica of Raccoon City. There were also five Xbox 360 kiosks available in the souvenir shop with the latest demo of Biohazard 6.

The Umbrella Laboratory attraction (the haunted house; this is where the Terminator attraction is typically held), only offered after 6PM, already attracted lines of over 200 minutes long by 5PM. According to USJ staff, if you had not gotten into the queue by 6PM, you would be unable to enter. I arrived just after 5PM and managed to secure a spot.

The line snaked around the Terminator building and was located mostly outdoors. At around 5:30PM, the worst possible thing occurred: a thunderstorm began and within minutes, rain poured over the park, soaking everyone unlucky enough to have gone to the park without an umbrella on an otherwise sunny and warm day (ironic, isn’t it?). I did not have an umbrella with me, and was subsequently soaked from head to toe. Luckily, it was still humid, so the crowd was in no real danger of getting sick.

I was more concerned about the zombie parade being cancelled if the rain didn’t stop. It cost ¥5200 (about 66.00 USD or 52.00 EUR) to enter the park after 3PM on a half-day ticket, so simply coming back the next day wouldn’t be a cheap venture. Furthermore, as the rain and lightning intensified, the theme park actually shut off all rides and attractions, including Biohazard, and asked people to “take shelter” until the storm blew over. This freeze lasted about 20 minutes, when the rain finally stopped and all attractions, including the Umbrella Laboratory, restarted. Close call, but the day was not over yet.

I finally got into the attraction at around 8PM after waiting around three hours (inside, they played the save room music from Biohazard 2 and CODE: Veronica), which, as mentioned above, is basically a Biohazard-themed haunted house with a series of rooms to view (all standing). The first room showed a “dead” human strapped onto a gurney on a suspended platform. The zombie began to move and struggle, trying to break free of the gurney. The crowd was so fixated on the zombie, and many of the people in attendance, about 90% Japanese and 10% non-Japanese, were quite terrified. The zombie was a good actor and quite convincing.

Then, screams from the audience in the back part of the room. Another zombie had snuck up on the crowd and made clawing and biting gestures, which is when people really began to scream. Two more zombies would appear from the side of the room, and more screaming. Then, two U.S.S. members arrived to “subdue” the zombies and prevent them from harming the audience. As the U.S.S. were tied up, yet another zombie arrived, but none other than Leon S. Kennedy in his RPD uniform arrived to subdue the final one.

With all zombies subdued and the gurney zombie unable to break free, the audience was moved into the next room, a theater auditorium. The seats were covered in black sheets. Suddenly, on the stage, a Cerberus, Hunter, Licker and T-002 Tyrant appeared, making taunting gestures at viewers. Then, three or four zombies them emerged from beneath the sheets covering the auditorium sheets, again taunting viewers. People still continued to scream.

The next room was a snaking tunnel with some monitors showing how the Umbrella-created T-Virus infects humans. There were rooms with glass windows lining the walls, with zombies or Lickers behind them taunting viewers. Then, the audience moved into a larger room with a life-sized, yet unbelievably gigantic Plant 42 suspended from the ceiling. In the next room, which appeared to be the upper floor of the auditorium from earlier, more zombies emerged from the seats. At least, the attraction ended as the exit doors came into view, letting the audience out into the Raccoon City replica.

The USJ New York area was recreated into a loose replica of Raccoon City. It was night out. There was a gigantic stopped truck in the middle of the street with a billboard that had the words “Welcome to Raccoon City” written in it. There was a also stopped vehicle in the road with blood all over it.

Crowds of theme park goers were gathered around a grass field that was fenced off with yellow “CAUTION” tape, with the iconic Universal Studios globe on it. This was effectively the stage of the parade. Suddenly, more zombies began appearing in random locations within the crowd, and indeed they would be located sporadically throughout the park for the rest of the evening. People screamed. Others laughed. Some took photos (like myself). There was a police officer zombie, a nurse and a few civilians about.

The outdoor stage was then filled with Hunters, Cerberus and Nemesis. The attraction would be topped off with Claire Redfield appearing from within the crowds and getting on stage to eliminate the B.O.W. A short time later, Jill Valentine would join the fray, attempting to fight Nemesis. The attraction had no proper end, and this sequence of events (zombies in the crowds, Nemesis and crew on stage, Claire and Jill appearing to save the day) would repeat for the duration of the attraction.

As a Biohazard fan and Osaka relatively close to Tokyo, where I live, I found it worth the visit. USJ is a great theme park, although similar to the Hollywood park, and a Biohazard-themed haunted house was always something I wanted to see. I wish the haunted house had been inside a Spencer Mansion replica rather than a fictional Umbrella lab, but it wouldn’t have fit the building layout at all.

Capcom clearly sees Biohazard as a first class, world-class property. The series now has S.T.A.R.S.-themed restaurants, five live action movies, $1300 leather jacket replicas and now theme park attractions. While this is a lot to swallow even for hardcore fans, it’s still an experience I’ll never forget, especially since not all game series are worthy of such prominent attractions. If you have the means to visit Japan, then please place Osaka on your itinerary and give Biohazard Halloween Horror Night at Universal Studios Japan a go.