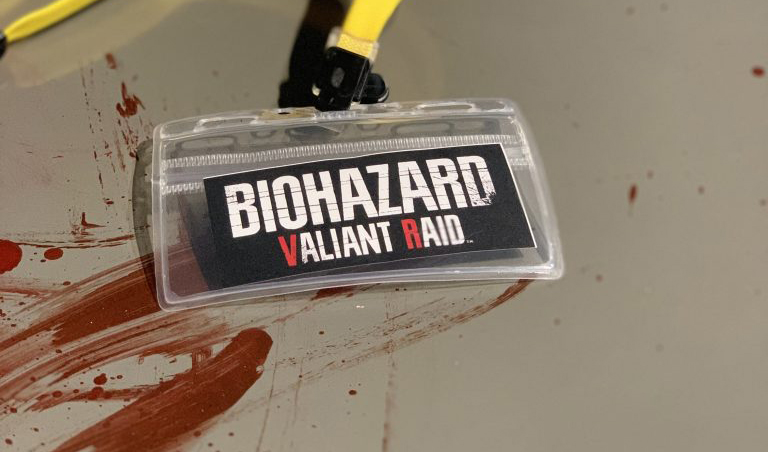 On July 19, 2019, Plaza Capcom Ikebukuro, an arcade center in central Tokyo, opened its VR attraction, BIOHAZARD VALIANT RAID. Unlike previous VR-compatible experiences such as BIOHAZARD 7 resident evil, VALIANT RAID is a short, multiplayer action-oriented experience taking place in what appears to be William Birkin’s lab beneath Raccoon City. Four teams from the Umbrella Secret Service (U.S.S.; teams Alpha, Bravo, Charlie, Delta) infiltrate the lab in search of Birkin’s virus, and in typical fashion, they encounter zombies and B.O.W.s, which they must mow down in order to escape.

The experience is entirely VR-driven, powered by the HTC Vive and two motion controllers. The graphics run on RE Engine and reuse textures, character models and environmental assets from BIOHAZARD RE:2. Between 2 and 4 players can participate in a single session lasting approximately 25 minutes and are assigned to one of the four U.S.S. Teams.

Players equip the Vive helmet and a pair of noise cancelling headphones, and then hold a Vive motion controller in each hand. These motion controllers are similar to the Wii Remote in that they are used for real-time motion aiming. The game begins with the U.S.S. Team having infiltrated Birkin’s lab. In my case, I was assigned to Delta Team with two others and soon after, we ran into Alpha Team, which was A.I controlled in this instance. Predictably, zombies begin to appear throughout the single L-shaped hallway, and each player is tasked with shooting the opponents before they are killed. The view takes place in first-person, and the equipped weapons are visible to the player along with the one to three other players.

Players get two of three types of weapons; the standard Handgun, the Shotgun and Submachine Gun, the last of which is only available in the second wave of the game. To reload, players must move their arms all the way down in a quick motion; the motion controllers must detect this movement for it to work. To change weapons, players must move their arms all the way up (being mindful not to hit the helmet). Characters do not take any steps forward to backward; players must be stationary. The only movement permitted is turning left or right to see other parts of the hallway.

And that’s all there is to it, pretty much. Soon, the zombies are joined by Lickers, triggering the second wave. Before long, Mr. X shows up, who like in BIOHAZARD RE:2 is evidently impervious to damage from any weapon. The room shifts to an elevator leading to a lower floor of the lab resembling the train area. The third wave sees players attacking zombie hoarders approaching from all sides. And predictably, Mr. X shows up and eventually kills all the players; evidently there is no way to survive this part and is a predetermined part of the experience.

It costs ¥2,200 (~US$20) to play the “Normal Edition” of VALIANT RAID; it costs an extra ¥300 (~$3) to play the “Deluxe Edition.” The difference is minute in that the Deluxe offers a shaking floor, which is only noticeable in the elevator section. Audio-wise, players will constantly listen to the U.S.S. Commander issue orders in Japanese (there is no English dub) as well as an arrangement of Mr. X’s 2019 theme, which is such a subtle track to begin with that it is difficult to hear clearly.

All in all, the attraction isn’t very interesting. It’s essentially mindless shooting with some cool VR technology, but the enemies are bullet sponges and there is little variety to the action. The graphics were pretty good, having been inherited from BIOHAZARD RE:2, and the Vive is a clear upgrade over the PlayStation VR, making this a more visually appealing experience than BIOHAZARD 7 resident evil. Still, given the hefty price point and short experience, I can’t really say I was too impressed, especially compared to past attractions like BIOHAZARD THE REAL at Universal Studios Japan.

You can read more about BIOHAZARD VALIANT RAID on the official Japanese website, where reservations can be made.