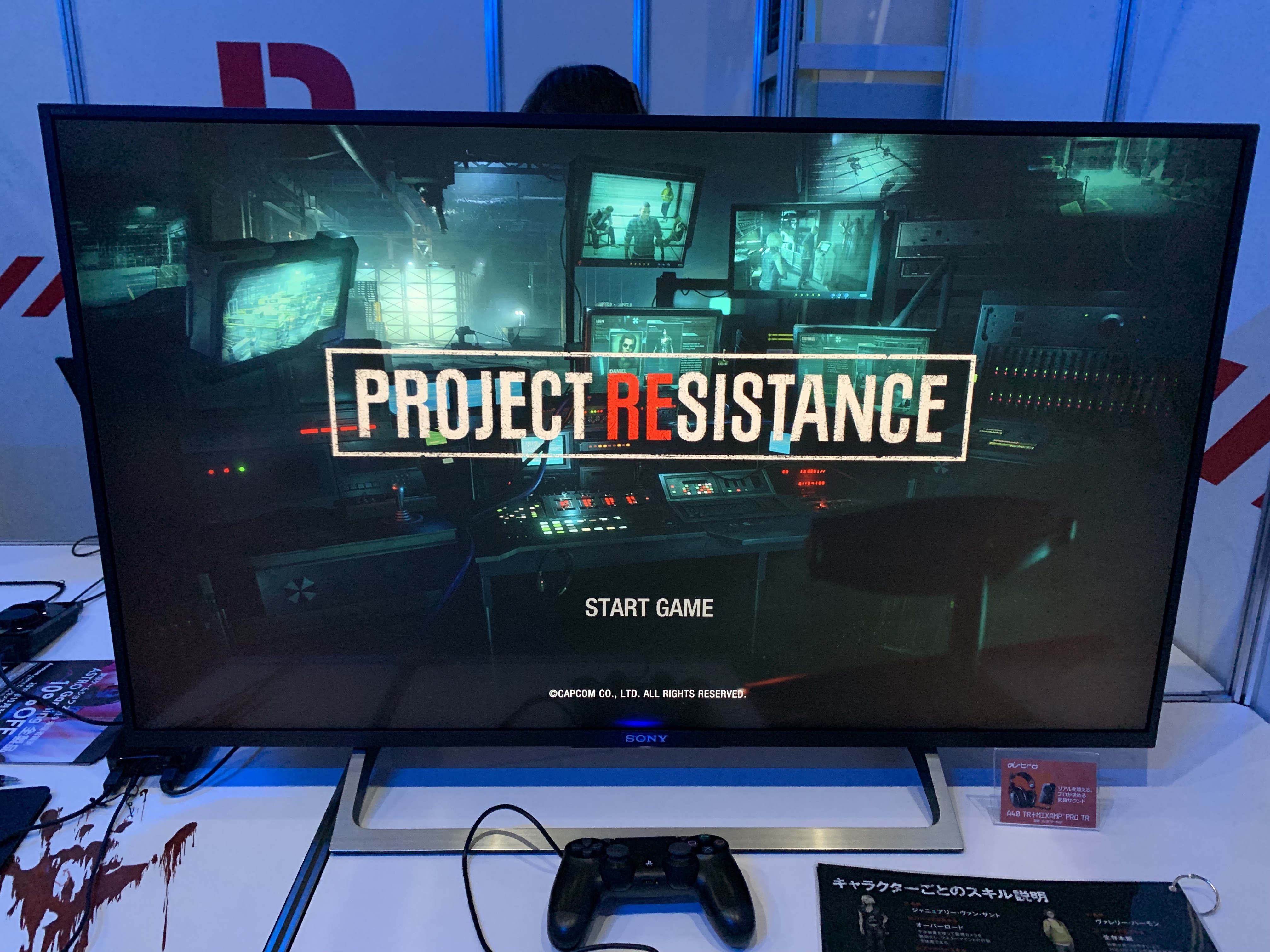 After weeks of teasing bits and pieces of information, Capcom has finally revealed–officially–details on its new “experience” called Project Resistance.

We first learned about the existence of the title via an e-mail sent to Japanese members of the Biohazard/Resident Evil Ambassador Program, which is essentially a club Capcom uses for various promotional initiatives; for Resident Evil 7 Biohazard, Capcom even recruited Ambassadors directly for focus testing in October 2016. The e-mail, sent on August 1, simply stated, “Today, we are letting you know that we are recruiting testers for a game that’s in development!!” There was no proper mention of the product being a new RE, although the fact they were recruiting RE Ambassadors made it likely that it was related somehow. Given that the long-awaited remake of Resident Evil 2 launched in January of this year, a new game this soon was somewhat of a surprise. Capcom conducted the Ambassador focus tests between September 8 and 9 in Tokyo. Afterward, on September 10, 2019, Capcom finally revealed the first teaser trailer for Project Resistance. Project Resistance is an online multiplayer (described officially as “Online Asymmetrical Survival Horror”) Resident Evil experience. Like other spinoffs, it takes place in Raccoon City during the zombie outbreak in 1998. The teaser depicts a laboratory and four unnamed civilians squaring off against zombies and Lickers using a mix of guns and melee weapons like pipes. The trailer ends with a mysterious man equipping a bionic pair of gloves, before seemingly unleashing a Mr. X Tyrant on the civilians, who’ve barely managed to survive so far. The man appears able to control Mr. X on his own thanks to his gloves. The 90-second trailer ends here, with more information promised for Tokyo Game Show (TGS) 2019, held September 12-15. There were some notable throwbacks to Resident Evil Outbreak in the trailer, such as the presence of four civilian players and the use of blunt weapons like pipes.

The game revolves around two different sides: the four-member “Survivors” team, and the lone “Mastermind.” It’s 1 vs 4, hence the “asymmetrical.”

On the Survivors side, you play as one of four ordinary American civilians: Tyrone, Valerie, Jan and Samuel. Armed with their own unique special abilities, they must work together as they navigate through a series of rooms infested with zombies and other creatures. The game adopts the third person over-the-shoulder viewpoint in place since Resident Evil 4; here it models closely after REmake 2 in controls, movement and overall feel.

In addition to the usual firearms, characters are able to use blunt weapons like pipe, bats and knifes. Players can also punch zombies, reminiscent of Jake from RE6. Tyrone’s special ability is a powerful kick that can come in handy. Like Outbreak, blunt weapons are breakable after a certain number of uses. The zombies in Project Resistance behave somewhat similarly to the tough-as-nails zombies featured in REmake 2, although they aren’t nearly as difficult to kill in most situations. Items like the Green Herb, Blue Herb and Yellow Herb return from previous games with similar purposes. There are Item Boxes scattered throughout the levels that allow players to buy more ammo, health or weapons using “Umbrella Credits” that they find throughout the levels–this currency system is reminiscent of the one featured in RE5.

In terms of exploration, the name of the game here is, just like Outbreak, cooperation. Given the sheer number of enemies, players are unlikely to survive alone for long periods of time. Classic Resident Evil elements like limited item capacity, locked doors and narrow corridors apply here as well. Each character has certain special abilities that can make the difference between life and death. Valerie can hold more items than the others while healing them with a single First Aid Spray (just like both Yoko and Cindy from Outbreak). Jan can use an EMP to destroy security cameras that alert the Mastermind of their whereabouts (these hacking abilities seem to draw inspiration from David and Alyssa in Outbreak). Tyrone is built like a tank and can sustain a lot of damage (like Mark from Outbreak), while Sam is an aggressive attacker. Players will develop their own preferences.

Each session has a time limit of around 10 minutes, with the clock running down or up depending on player performance. The Survivors must reach the exit by solving all of the assigned tasks, such as puzzle-solving, destroying so-called “Umbrella Cores” or item locating before the timer runs out. Some doors need several keys to unlock; others can be opened by shoving it enough times, another element inspired by Outbreak. Players can lose enough health and subsequently die, but in a new twist, they will respawn after a few seconds, with the timer run down considerably, so while players will be given second chances in life, they cannot die too many times without risking the clock running out. There might be an overtime grace period after the timer hits 0, in which the game will end and all players will be “terminated.”

No two play sessions are ever going to be identical for one simple reason: the presence of the Mastermind, the scientist from the end of the teaser. This fifth player takes a backseat to the action, spying on the other players via security cameras in an attempt to sabotage their survival.  This isn’t actually the first time the series has explored the idea of playing as the enemy; Resident Evil 6 featured the Predators DLC, where players could control Ustanak against several other protagonist characters in a timed mode. Outbreak, Outbreak File #2 and Resident Evil Operation Raccoon City allowed players to temporarily become zombies if they died or their viral gauge reached 100% (only in online mode).

However, the Mastermind is the most advanced take on the idea of controlling enemies, and several new possibilities are opened up. Controlling the Mastermind comes with a plethora of interesting options. He can lay traps, spawn various enemies such as zombie dogs, Lickers, and even lay items like traps and bombs. A certain degree of predictive ability will be needed to successfully sabotage the survivors as the Mastermind will need to track the group’s movements. Should the Mastermind choose to deploy Mr. X, the fifth player can control Mr. X and have it punch or and charge at the Survivors.

Therefore, whether the Survivors have a smooth ride or a difficult mountain to climb depends on the creative ability of the Mastermind to set traps and make things interesting. Combined with the four different character types, varied replay value is virtually limitless.

The environments and character models once again utilize Capcom’s preferred photogrammetry visual scanning technique, powered in-game by the RE Engine, offering a familiar overall look to RE7 and REmake 2. Because there is more happening on screen than the previous games due to the multiplayer, particularly in terms of AI activity, the game manages to stand well next to REmake 2 and RE7, even if it may not look quite as detailed. The TGS 2019 demo was running on a PlayStation 4 Pro, which seemed to handle the action with a smooth framerate. As with other RE Engine titles, expect the game to run best on either a powerful PC or the Xbox One.

As an in-development prototype, there were several bugs and incomplete elements in the game that will need polish and adjustments. The enemies do not seem to react to attacks from firearms or melee weapons in a noticeable way, which can make it difficult to gauge if an enemy is sustaining damage or not. Other visual elements seem mismatched or non-final. Where RE7 and REmake 2 kept the HUDs to a minimum, Project Resistance is overflowing with them, making the game less cinematic.

I personally had a lot of fun with the demo on the Survivors side. The other three players I was grouped with were genuinely engaged in the experience, and each player did their best to assist each other. The first session featured a player who wasn’t highly skilled as a Mastermind; it made the playthrough somewhat manageable despite limited experience with the game. The second Mastermind was far more devious and cleverly timed the appearance of certain enemies and traps. The group dynamic made for an entertaining experience.

The best part of playing as a Survivor was the tension. It’s very different from the usual tension in a RE game in that a lot of your success will be dependent on the competency of your team and the deviousness of the Mastermind. It’s not enough to be good on your own; everyone needs to be on the same playing field. To know that your future is out of your hands was, during the demo session, a surprising motivator to be on my toes during the session. Players remain in constant contact via voice chat, which was eschewed in the Outbreak games.

However, it must be emphasized that Project Resistance will not be for everyone. Players who are looking for solo experiences, want to play games with a reasonable level of predictability and want to play at their own pace may not find much here. Diehard Outbreak fans, plus people who enjoy minigames like The Mercenaries may have plenty of fun. I must emphasize that it’s not really reasonable to judge until one tries it for him or herself. I initially had doubts, but changed my mind after the first try (whereas my opinions on things like ORC and Umbrella Corps never changed, even after release).

Finally, it should be noted that although the TGS demo was network-only, there are plans for an offline mode that Capcom will unveil at a later date.

As of now, we don’t know what the final name for Project Resistance will be. That the game technically does not carry the RE name is notable, even when compared to Umbrella Corps, which still carried the Biohazard name in Asia even if it didn’t elsewhere. It seems to be an indicator that Capcom has more plans for Project Resistance. What those will end up being, we’ll have to see in the next months. The project currently has no stated release date, price or distribution format. Capcom is soliciting feedback from all testers, so players should be sure to let Capcom know what they can do to make Project Resistance the best game it can be.