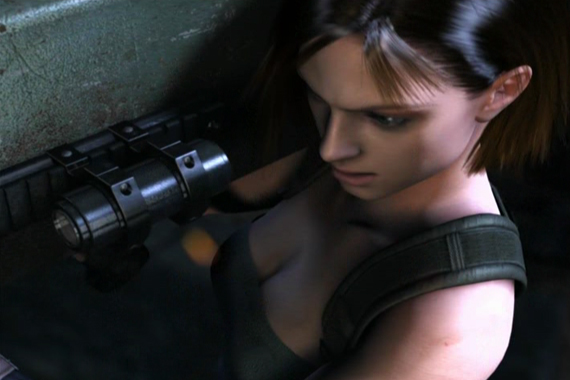 Released in Japan on July 2008 by Yamasa Entertainment (in direct cooperation with Capcom), Pachi-slot Biohazard is an arcade game for the japanese “pachinko” machines. This non-canon title follows the storyline of Biohazard (Rebirth), although with some changes such as Barry helping Chris, Jill wearing her Last Escape outfit and Wesker monitoring our heroes in an isolated room.

Development began on 2006 with the creation of a short CGI promo trailer that focused on Chris Redfield and Jill Valentine fighting zombies and various B.O.W.s in the Arklay Research Facility. On late 2008, Capcom and Yamasa Entertainment released the Official Soundtrack CD for „1,980. It included 50 tracks in total. Most of them were original pieces created for this title, such as the theme song “Zero Ground” composed by Satoshi Ise from Capcom and performed by artists Mr.K, Mr.B, Mr.C and Mr.D.

The gameplay of Pachi-slot Biohazard basically consists with the player (as Chris or Jill) gaining points to continue the story by inserting coins into the pachinko. Unlike in most slot-machines, the player has to pull down a lever and repeatedly press a button to shoot the enemies. Depending on the combination of the 4 squares in the wheel, the player will be able to make a certain ammount of damage. If nothing is done when prompted, Barry or Rebecca will show up to finish the enemy.

Wesker Mode: in this mode, Chris or Jill have to defeat 49 enemies that Wesker releases from his hideout. Once the player has succesfully defeated them all, there’s a scripted sequence where Wesker is shot in the arm, thus winning the game.

This is not the first time Capcom licenses their franchises to pachinko machines, with other cases being Devil May Cry and Onimusha series, proving to be a successful niche in the Japanese market with various releases every year.