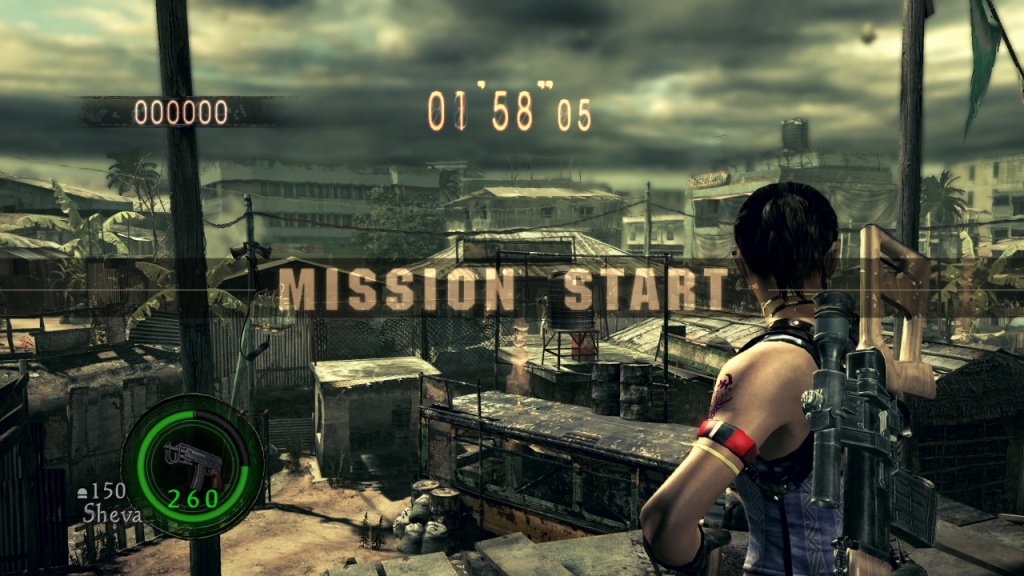 Mission Start is a guide written by member Detrimantix in order to assist players in becoming more acquainted with Biohazard 5’s Mercenaries mode. This guide is written with high level play in mind, the most basic of basics can be found elsewhere. Tier Lists are subject to change over time, though we assure the latest and most credible list to date. If you have any serious questions please post them in our forums.

The H&K P8 (Handgun) is weak with a generous capacity, which is exactly what you want, one headshot to any normal enemy into his Cobra Strike is an almost guarenteed +5 seconds on the clock, and the S&W M500 (Magnum) he carries makes quick work of any enemy, bosses included. It is highly recommend that you discard the proximity mines at game start other than on the Mines or Ship Deck, as they are borderline useless otherwise and only succeed in taking up a valuable slot in your inventory.

The VZ61 (Machine Gun) is incredibly efficient at controlling groups of enemies, and once floored leave them open to her Double Kneedrop which kills almost 100% of the time and is one of the safest and fastest melee attacks in the game. The H&K PSG-1 (Rifle) allows her to take out bosses relatively quickly. The loss of flash grenades make her slightly less useful for duos than her alter ego but that’s a matter of opinion. There’s no question however that she’s the stronger solo character overall.

While seemingly strong, everything he can do his Midnight counterpart does better. His Samurai Edge (Handgun) while powerful and can set up his melee kills fairly consistently, suffers from a much lower capacity than the H&K P8. To make things worse the L. Hawk (Magnum) does about half as much damage as the S&W M500, and the Hydra (Shotgun) should be avoided at all costs if a high score is your goal. He’s an incredibly strong character, but is lacking in many areas that hold him back from placing higher.

A very well rounded character, one many seem to overlook, the SIG 556 (Machine Gun) even though burdened with a low capacity sets up his neck breaker consistently on every stage. The S&W M29 (Magnum) comes loaded with 12 bullets with 6 to spare totalling 18 bullets at game start, and while the Grenade Launcher is kind of a toss up as ammo pick ups are uncontrollable, it’s effectiveness in the long run can’t go overlooked.

Her H&K MP5 (Machine Gun) has half the capacity of the VZ61, but is equally effective and should be used the same way. The 5 flash grenades she starts with are great back up when unexpected parasites appear, her only real weakness stems from the fact that she has a tough time with the majority of bosses. However, she is still one of the strongest duo characters when paired up with a character that compensates for said weakness.

He should be played almost indentically to Wesker (Midnight), his SIG P229 (Handgun) on headshot does just enough damage to finish enemies off with a straight afterwards, and the Rockets are invaluable on any stage, unfortunately he only has two, and most stages have more than two boss enemies which leaves you at quite a disadvantage once they’re gone. The M3 (Shotgun) should be avoided aside from keeping your combo going.

Her VZ61 (Machine Gun) has a decent clip capacity and sets up both her impale and throat slit with ease, unfortunately they don’t gain much time in the long run as they are both relatively slow. The Dragunov SVD (Rifle) is great for bosses given that it’s semi-automatic, and while it is advised that you discard her M92F (Handgun) in favor of exclusive machine gun ammo drops, the choice is entirely up to you

The Longbow is slow yet strong, and ammo is obviously not an issue given that it’s infinite, but other than her starting freeze rounds and a knife, she has virtually no way of accumulating time. Excluding a couple stages where her disadvantages aren’t as evident, she simply can’t compete with the rest of the cast.

Plays almost identically to Leon in Resident Evil 4, and unfortunately suffers from the same disadvantages, but even more so here due to increased enemy durability, as well as changes to the rulebook. The Ithaca M37 (Shotgun) while boasting a surpisingly high ammo capacity should still only be used to continue a combo or deal with bosses, as hand grenades are your only other option on most stages. Both of his alter egos are superior by comparison, and as a starting character Sheva just has more versatility.

Often considered to be worst character in Mercenaries, and with good cause. The AK-47 (Machine Gun) is decent for setting up her melee attacks, but you can’t gain time due to them taking too long to complete. The Jailbreaker (Shotgun) should be discarded at start in all honesty, it consistently fails to kill anything that’s outside melee range and has a terrible spread. To top things off the S75 (Rifle) while strong is still far too slow to be used to deal with bosses or anything stronger than your average majini. Avoid at all costs, unless you really want to make a name for yourself.