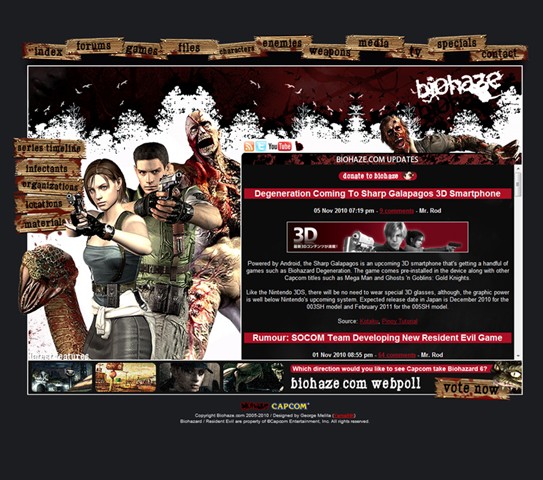 Biohaze is turning five and suddenly I feel like an aged father of four, or four thousand. Considering the content at hand, I’m going to approach this special as more of an informative history blog than an editorial. We’ll move on to the birth of Biohaze.

2002 was a genuinely beautiful year for Biohazard fans. Rebirth was looming, Biohazard 0 directly behind it and at the time the rest of the series was said to be being remade in the fashion of Rebirth. All of these titles and Biohazard 4 was still in the foreseeable future. There was a ton to talk about and while I personally participated on sites like Resident Evil Fan and Biohazard Extreme, I was also a member (and later Moderator) on GameSpot.com. Within this site started a thread in the GameCube forum titled Everything Resident Evil, it was a stickied and dedicated topic to the Biohazard franchise. This was the early groundwork as we accumulated various members who provided both resource and insight on the series.

Eventually GameSpot moved from their Lithium forum boards and started to provide various new features, one being user created forums. Due to this, the thread that lasted multiple years eventually became it’s own forum within the GameSpot structure. Along with the new forum, we also started our own unofficial union (before unions were a part of GameSpot’s structure). Fun to note, Green_Lizard and myself started handing out union signature banners to members. This eventually took off and to this day most of GameSpot still replicates these in their own way.

The Everything Resident Evil forum lasted only a couple of months as the structure of GameSpot continued to change, this time in a different manner. GameSpot and GameFAQ’s merged and due to this so did the multiple Biohazard game forums and members. This is also around the time of the review scandals and such. With the bad karma and influx of new members I kindly took an indefinite break from moderating and decided something fresh needed to happen for our members.

I pitched the idea of running my own forum, or potentially website, to the Everything Resident Evil members. The positive feedback confirmed this was the way to go and I then put together a dedicated forum for our members, titled Biohaze. This was a sad and yet exciting time. From 2002 – 2005 Everything Resident Evil served a huge community on GameSpot, though due to their own changes it was the best time to start something new. Though hard to say goodbye, Biohaze opened up an entirely new door of possibilities.

In our first month Biohaze was strictly a forum, something we were used to. While the transfer of members went smoothly, obviously all of our posts were lost. Within our core of members, we also had a ton of resources, some better suited for a website than a small forum. With this I wasted no time and continued to make Biohaze a full blown Biohazard resource, or what I thought was one at the time. The forum started on November 3rd and the website sometime in early December of 2005. The style was similar to our Everything Resident Evil banner’s and the old GameSpot color scheme. Though the information at the time was average at best, our community tied together nicely and was a focal point of the site. We kicked it off with various competitions, one of the first giving away a free copy of Outbreak FILE #2.

Within a year of creating Biohaze, I felt constrained by the site’s structure. Though this was my second big website at the time, I wasn’t familiar with the coding aspect as much as I was the design. Needless to say, as the members and information started to roll in, the site needed to change or else it wouldn’t be able to keep up in a user friendly manner. This is when Biohaze V2 came long, in 2006. The site and forum were completely overhauled and we started to receive an influx of new members. Though we originally promoted a bit on GameSpot, I then started to reach out to the Outbreak community. In this regard nothing has changed as even now we remain one of the only sites to push the remaining elements of the online titles. However at the time when Outbreak was lively in North America, a lot of players found their way to Biohaze and made it their home.

Biohaze was originally developed as a friendly alternative for GameSpot users and other Biohazard websites alike. It was never developed to be a challenger, instead to work alongside other sites and offer a unique perspective on the series. It was this unique perspective and various features however that brought in many new members and most of all viewers. Working with the other sites also offered a lot of input to success and different approaches to both the community and web design in general. I do believe Biohaze’s friendly and supportive nature is the key element to it’s success beyond the GameSpot days.

Around this time, we also received members who would later become a huge part of the site. Though not part of the original cast, members like Mr. Rod, cvxfreak and TheBatMan have taken my vision for Biohaze and ran with it each in their own unique ways. Each of them has added so much to the site that I can honestly say it would not be the same without them. Members like SunglassesAtNight also provided a constant news feed and continued to keep Biohaze up to date at all times.

During the time between 2006 and 2009, we finally received a mainstream title to be introduced to together, discuss and play for the first time; Biohazard 5. Biohaze won the Kijuju Competition held by Capcom, was the first website on the internet to show footage of Lost in Nightmares and attended Tokyo Game Show 2009 as press. It was our first chance to cover a new Biohazard title and we cohesively brought some of the best coverage possible.

In November of 2009 I pitched the idea to Mr. Rod that I wanted to design a new Biohaze from the ground up, though I’d need his help as it’d otherwise take months to complete. With his vigorous help, we combined for one of the best efforts I’ve experienced. It took literally thirty days to complete in which we worked on the website nearly every day. When the new website was launched it was covered by Capcom, other Biohazard websites and even select gaming press. The new website once again allowed Biohaze to grow beyond it’s older shell which was starting to limit us. With the re-launch we have gained new members, introduced special competitions and features and surpassed our original goal with a whopping 26,000,000 hits in a single season and are continually growing.

It’s been a long road for Biohaze and the groundwork was ironically laid in areas outside of it’s own territory. This however is what made us a unique alternative; outside perspective formulated in our own manner. Relationships with other sites have been our most pertinent element to success and we thank all of them for their support over the years. Here’s to another five!