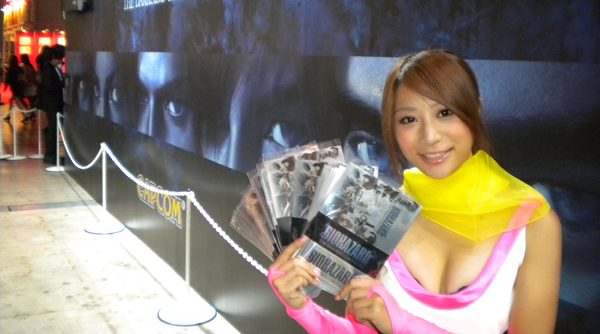 Biohaze finally managed to play the demo version of BIOHAZARD The Darkside Chronicles (“Darkside”) at Tokyo Game Show 2009. As with the previous year, TGS is a four-day gaming event equivalent to the U.S.’s E3, allowing the gaming and entertainment press to preview many games soon to be released. The final two days are open to the general public. The exception to the list of participants is Nintendo, although third party games for the DS and Wii can and do make the exhibits.

Darkside was one of those games exhibited. Two years ago, THE UMBRELLA CHRONICLES (“Umbrella Chronicles”) was exhibited. Last year, many spent nearly an hour lining up to play BIOHAZARD 5’s various incarnations. Luckily, Darkside’s lines were quite manageable on press day. Never too long, I managed to play through the demo on single player (co-op also available for those with friends) three times, playing “Operation Javier” (entirely new, starring Leon S. Kennedy and Jack Krauser), “Game of Oblivion” (based on BIOHAZARD CODE: Veronica, starring Claire Redfield, Steve Burnside, and Chris Redfield), and “Memory of a Lost City” (based on BIOHAZARD 2, starring Claire and Leon).

When playing Darkside for the first, gamers will immediately notice the large amount of technical polish over Umbrella Chronicles. Umbrella Chronicles was a solid game visually, and probably among the Wii’s best, but there were a lot of sloppy textures and visual inconsistencies overall, especially since the game adopted the visual framework of three different games (biohazard 0, biohazard, BIOHAZARD OUTBREAK) as well as its own chapter. Darkside is, for the most part, entirely new assets, so the visuals are very consistent while following the patterns set by BIOHAZARD 2 and CODE: Veronica. The game is even more detailed than biohazard 4 and the 2003 Russia chapter of Umbrella Chronicles, although some bits, like the ugly, PS1-esque fruit baskets in Operation Javier, really need to be replaced before release.

On top of the visuals, the physics are also improved, especially thanks to the implementation of the HAVOC engine. When zombies are shot, they react properly, rather than seeming unaffected as in Umbrella Chronicles. The animations are also smoother and more realistic. The demo has some framerate issues, but was quite playable in all chapters, running smoothly overall despite the amount of action going on. There was little, if any slowdown that affected gameplay. The final build should be even better. Load times were quite minimal.

It was difficult to evaluate the audio since the showroom was very noisy and unlike the BIOHAZARD 5 demo, no noise-cancelling headphones were provided. Based on what we can sample from the homepage and trailers, from the fact that Biohazard 2 and CODE: Veronica are the foundations for the game, and from the fact that the game’s soundtrack is orchestrated, we can conclude that the game will continue the series tradition of high quality compositions and samples. Noises such as gunshots, zombie moans, and footsteps sounded the same as they did in Umbrella Chronicles. Capcom got those details down ages ago, so that is of little surprise.

The CG movies are leagues beyond the movies featured in Umbrella Chronicles. The CG is of very high quality, as you may have seen from the trailers. The last time we had high-quality CG in a Biohazard game was OUTBREAK FILE 2, but I can say that Darkside has even better CG than that game. It may be a disappointment not to see an in-game cutscene engine as with biohazard 4 and BIOHAZARD 5, yet the CG in Darkside, highly detailed, gets the job done.

Like Umbrella Chronicles, Darkside is a lightgun-style shooter. Use the Wii Remote to aim a reticule and fire at the zombies before they devour the protagonists. The basic gameplay engine is the same as the previous game, so you will feel right at home. The new addition is the shaky cam, which was toned down quite a bit from the E3 2009 build, so aside from scripted events, the shaky cam was of little trouble.

Operation Javier is a completely new chapter not based on anything before it, and stars Leon and Krauser before the events of biohazard 4 in 2002. The game begins in a South American village and before long, the zombies come out to play. The game progresses from the village and its various buildings, as spiders (of a South American flavor), amphibian Hunters and other creatures, including a new serpent boss, attack the two. The game mixes action with pre-set exploration scenes. Considering that it’s assumed to be the final chapter in the game, the chapter wastes little time getting gamers into the action. From a pacing perspective, the chapter is not quite as packed as the first of the three Russian chapters in Umbrella Chronicles, but still fit for one of the last stages.

Game of Oblivion is based on CODE: Veronica, and despite the Wii being in the same technology generation as the Dreamcast, the visuals are several times improved over, yet retain the basic look and feel of the original game. It begins similarly to the actual CODE: Veronica game, with Claire and Steve meeting up, though they actually stay together in this game for very obvious reasons. The level begins in the Prison, and I have to say, this was the worst scenario of all featured in the TGS 2009 demo, and the worst of the Chronicles games so far. There are very long moments where we are just inspecting the Prison, expecting zombies and dogs to jump out. Since most of us have played CV, the element of surprise was minimal. The pacing was definitely not as good as the other two chapters. The demo ends with us hacking away at bats for several minutes, a relatively unexciting ending compared to the boss in Operation Javier.

Memory of a Lost City is based on BIOHAZARD 2, though thematically, it’s actually quite similar to the faked BIOHAZARD 3: LAST ESCAPE chapter in Umbrella Chronicles. That chapter, Raccoon’s Destruction, as you may recall, took Jill’s alternate costume from biohazard and a new character model for Carlos, rearranged a bunch of OUTBREAK levels, and then called itself the symbol of BIOHAZARD 3 for Umbrella Chronicles. Memory of a Lost City is far more faithful to the source material than Raccoon’s Destruction, but the point is that both chapters take place in the streets of a zombie-infested town, requiring Claire, Leon, Jill and Carlos to take back alleys and avoid unnecessary confrontation. Of course, the demo only featured the streets, since it appears that the scenario continues into the RPD (which was also featured in Umbrella Chronicles). The pacing was similar between the two scenarios overall, and I cannot decide which one I enjoyed more. Despite the lack of authenticity, Raccoon’s Destruction was quite a fun chapter. At the very least, Memory of a Lost City is, so far, quite better than Game of Oblivion.

Overall, the demo left a favorable impression. Capcom and cavia are clearly working hard to make this game quite good. BIOHAZARD 2 and CODE: Veronica are very much loved in the series, and I owe the latter to my interest in the series, so they have a high standard to meet. But in the context of the Chronicles series, Darkside gets a lot right. It’s definitely going to be superior to Umbrella Chronicles, which was a solid, if not spectacular game. If you do not like lightgun or rail shooters, then this game will still not be for you, in which case, you may want to try out BIOHAZARD 5 ALTERNATIVE EDITION instead. Of course, those who are nostalgic for the classic Biohazards may be able to appreciation the remade and remastered environments from BIOHAZARD 2 and CODE: Veronica.

BIOHAZARD: The Darkside Chronicles hits North America and Europe on November 27, while, in a highly unusual move, Japan-based gamers have to wait until January 14, 2010 to buy the game.