BIOHAZARD 7 Inside Report File 02: The Day 7 Was Born 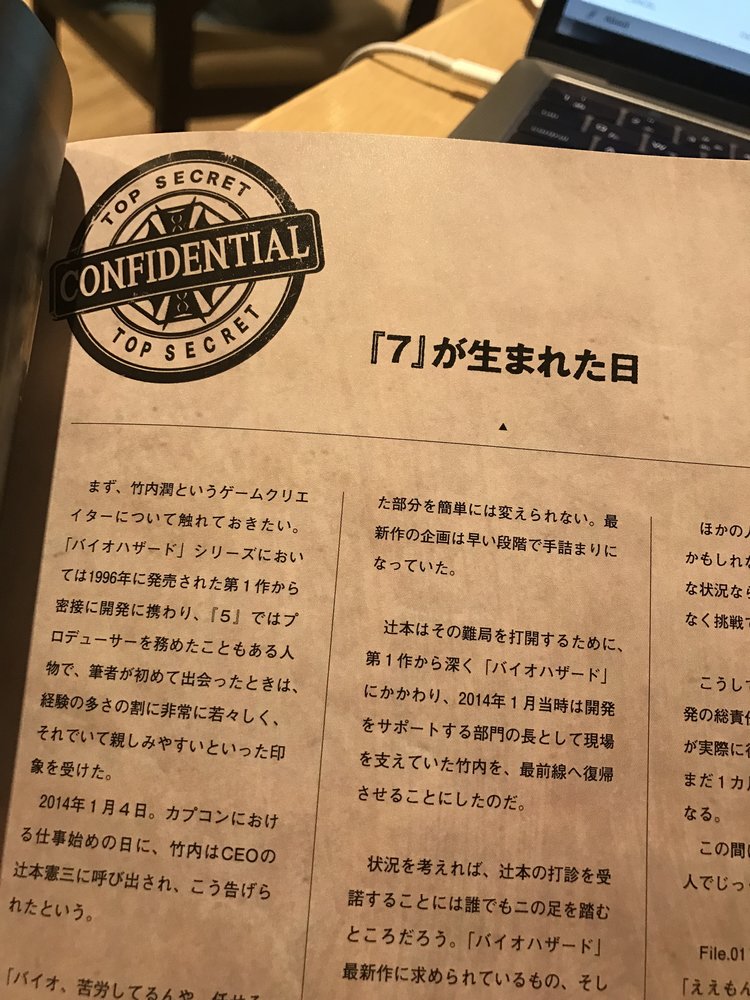 First, I’d like to touch upon the game creator named Jun Takeuchi. He’s been closely involved with the Resident Evil series since the first game in 1996, and was Producer for Resident Evil 5. When this author met him for the first time, I noticed how youthful he looked compared to someone with the amount of experience he has, and he gave me the impression that he was easy to become very friendly with.

January 4, 2014. This was the first working day at Capcom for the year. Takeuchi was called into CEO Kenzo Tsujimoto’s office. Tsujimoto said to him:

At that time, development on the newest Resident Evil game was undergoing a difficult period. Resident Evil 6 has sold 6.6 million units worldwide, and many game fans responded positively to the charming cast of characters and the multiple crossover scenarios, which featured strong action elements. However, as the emphasis on entertainment through action grew, the horror elements would conversely appear more diminished. For existing fans, this had its pros and cons.

If the next numbered RE title following 6 were to be developed, it is inevitable that it would get lost trying to find its desired direction. It could not just be a rehash of 6, but at the same time changing what actually works is not a simple task either. Planning for the newest game had hit a wall early on.

In order to break through that wall, Tsujimoto brought Jun Takeuchi, who was deeply involved in the first Resident Evil, back to the forefront as the head of the development that he had only been supporting up to that point in January 2014.

Looking at the situation at the time, anyone would be hesitant to accept what Tsujimoto had asked for. The things being demanded for the newest Resident Evil game, and the pressure of having to work on it, were a tremendous undertaking. However, Takeuchi, despite being taken aback by Tsujimoto’s words, responded confidently:

“Understood. I humbly assume responsibility for it.”

It was a quick answer. That was the moment when Resident Evil 7 was born.

“Leave it up you.” Those are probably the words that resonated heavily. However, no matter which way one looks at it, why would Takeuchi assume responsibility for the troubled development of RE7? For Takeuchi, however, there was nothing at all difficult about the game’s situation.

Any other person would probably be very hesitant. However, if this situation was as difficult as it seemed, then perhaps that would invite a challenge without limitations, right?

Takeuchi, now in charge of the development of Resident Evil 7, would first need about one month from the time of Tsujimoto’s request to actually get moving on the project. Takeuchi would use this period to think carefully about how to do the project.

As mentioned in File 01, Takeuchi’s two objectives were to create “something good” (“work hard”), and to create a development environment where personnel could be trained and brought up well. So, the first question was, what needs to be done to create “something good”? The Resident Evil series, up to this point, had been developed at the hands of some very distinguished creators. However, saying things like “the first game was like this” and only making references to the past would only serve to keep the series shackled.

Of course, there is value to learning about how the previous Resident Evil games were created. Reflecting back on the series’ entries, there exists imagery that forms the “nucleus” of Resident Evil. For the first game, it is the slow-moving zombies, and for Resident Evil 4 it is the chainsaw man. For Takeuchi, who had been there since the beginning, those thoughts were quite strong. First, there is the vision of what the “nucleus” of the series is, and by sharing that vision with all team members, a game with a heart is born. To develop the desired “nucleus” of the game, it is important to give the team very clear guidance. Conveying this technique to others is also one step toward fostering the development of human resources.

Takeuchi also thought about his age. It had been 25 years since he joined the company, and he would soon turn 46. He thought to himself, “How many more games can I create in the rest of my life?” He then realized he didn’t have time to create games that he didn’t want to create.

“If that’s the case, then I need to create the best Resident Evil game I can.”

After resolving to do that, the next thing Takeuchi did was figure out, “what elements of Resident Evil do I like?” What is Resident Evil? Above all, Resident Evil is horror. Also, it is associated with dangerous enemies wandering around places that players explored; or that chilling feeling of not knowing when you would be attacked by an enemy from behind. Then there is item management: dealing with the limited number of items and trying to do battle with them. Even though enemies become less frightening as the weapons get stronger, ammunition is always limited. And when the items you depend on are finally depleted, the fear doubles instantly. These elements are common within the series, and through the power of next-gen hardware, they could be brought to the next stage and made into reality.

Also, at that time, open world games were trending. Takeuchi felt that such large-scale games as open world games were not the strong point of Japanese developers, particularly Capcom. The Japanese were experts at craftsmanship. The pursuit of one element and having it reach its maximum potential. In other words, the concept of “narrow and deep.”

By gathering his thoughts, Takeuchi realized exactly what he wanted to do. He wanted to make a Resident Evil that was scarier than any other game in the series. To express those elements of horror, there was no need to have a large number of action elements. There was no need to have vast stages, and there only needed to be a small number of enemies. And there would be no need for online multiplayer elements, which is something that large game publishers believed to be a given. That a horror game would be more enjoyable as a single player game was a given…

However, Takeuchi realized that his vision also brought about certain problems. The industry was overflowing with the expectation that things needed to be “bigger and flashier,” more bombastic and grand. Would a game whose concept was to be “narrow and deep,” which flew in the face of convention, be well-received by fans? Also, how many of Takeuchi’s staff members would be able to understand this idea?

Takeuchi began to assemble the team that would go on to develop Resident Evil 7.