BIOHAZARD 7 INSIDE REPORT File 01: The Meaning of A Moment of Silence 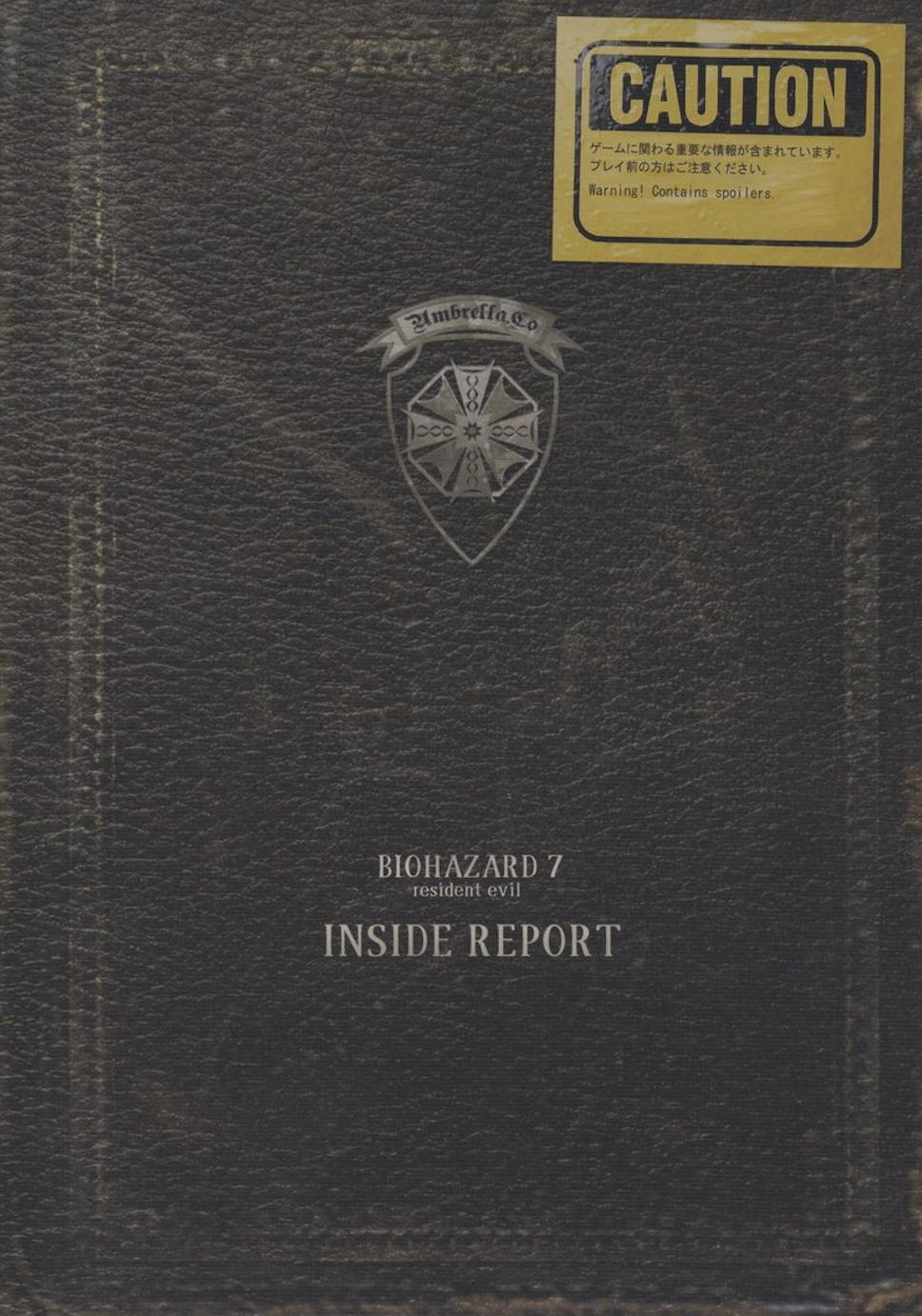 BIOHAZARD 7 resident evil INSIDE REPORT was included in the COMPLETE EDITION of the Japanese version of Resident Evil 7 Biohazard. It is only available officially in Japanese, and no official English translation has been announced. It is written by Toru Shiwasu, a novelist and editor for Dengeki PlayStation, in cooperation with e-Capcom, Capcom Japan’s merchandise shop. The unofficial translation contained in this site was written and edited by Alex Aniel (@cvxfreak).

June 14, 2016. Around 9:30AM Japan Standard Time. On this day, series producer Masachika Kawata and several staff members were in Los Angeles, USA, overcome with both excitement and worry. Game fans everywhere had their eyes focused on E3 2016, the world’s largest game industry event; here, Kawata was to announce the newest entry in a series that Capcom has long poured its heart and soul into, one that Japan could proudly show to the rest of the world.

10AM. The E3 2016 PlayStation Press Conference began. Triple-A titles for the PlayStation 4 were announced one right after the other, and with each announcement came cheers from the audience in the auditorium.

20 minutes later, the auditorium became eerily silent. A trailer for a certain game began to play. The audience members quietly held their breath as they watched the trailer. The first visual to appear on the screen was an ominous ringing telephone. After that, a decrepit house. A dead body lying on the ground. An object that reminds you of intestines. And then the mysterious characters. Was this trailer, intended to instill an unidentifiable fear amidst the silence, for a brand new horror game? There is no doubt that these questions crossed people’s minds.

However, as soon as the game’s title was called, there was an eruption of applause, beginning with the press and staff members in the auditorium, before spreading to the people around the world watching the livestream. The title for the game was Resident Evil 7 (BIOHAZARD 7). This was, without a doubt, the latest entry in the series that the world had been waiting for.

Well, if you watch the livestream again and pay close attention, you might notice something.  There was this moment in which the trailer plays, the title is called out and the audience erupts into applause. The very silence from the audience — isn’t that what Kawata and the rest of the staff were hoping to achieve? Those who were bewildered when Resident Evil 7 was announced unexpectedly; those who thought the trailer was for a brand new series only to be shocked that this was a Resident Evil game; those who were shocked that the new Resident Evil had evolved into a highly realistic looking game. The visuals of this trailer were different from anything that came in the series before it, and after the moment when they witnessed all of this in total silence, the audience transformed, expressing voices of jubilee. When the staff members in attendance, including Kawata, all witnessed these reactions, there is no doubt that they felt a tremendous sigh of relief. The initial impressions of Resident Evil 7, which was finally out in the open, were exactly what they were intending to achieve — no, the audience reaction was even happier than they expected, and this was all because the audience was able to witness that moment.

Until the E3 2016 announcement, they had all kept the existence of Resident Evil 7 a secret. In this internet-oriented information society, the number of Triple-A titles that aren’t leaked ahead of time are few and far between. This surprise was possible due to the tremendous effort on the part of the development team, an effort paid off in kind. The initial announcement of the newest Resident Evil spread quickly throughout world despite the lack of hints prior. This news was exactly what the fans were eagerly awaiting.

The first thing to capture one’s attention is the graphics, which illicit fear or horror from within the viewer. Capcom developed a new engine for Resident Evil 7, which they named RE Engine. It is capable of producing photorealistic visuals that can match live-action films and can portraying the detail of various objects from the textures of various objects to dust particles floating in the air. RE Engine was first implemented into Resident Evil 7, but there are plans to utilize this truly next-gen engine in various other titles. And above all else, Resident Evil 7 is a definite achievement as a game itself. The viewpoint changed from an objective viewpoint to a subjective viewpoint. It takes place in an ominous residence that reminds gamers of the first Resident Evil. Lastly, the established Resident Evil characters were nowhere to be found, and the identity of the enemy, not to mention the antecedent of the protagonist, were not revealed at all. Capcom went even further to digitally distribute a demo of the game at the same time as the announcement. As gamers around the world reacted positively to this news, there were many reactions.

On this day, it was probably Kawata who paid the most attention to these game fans’ reactions. While he was relieved at the reactions to the game’s debut, he observed the situation calmly. Kawata, as the producer of the Resident Evil series, was in a position where he had to ensure that the project would be a success. The previous title, Resident Evil 6, achieved sales of 6.6 million units globally (as of September 30, 2016). Creating a concept that followed the one set by that game wouldn’t be a strange decision to make. However, Resident Evil 7 did not follow in Resident Evil 6’s footsteps. Why did Kawata, as the series producer, decide to break with precedent, and embark on a path of that appeared to be high risk? Why did he undertake a challenge by changing directions? To understand why, one must know what Capcom CEO Kenzo Tsujimoto often tells to his staff:

“Work hard, fight hard.” (Translator’s note: The original phrase is “ええもん作って勝負せんと,” which is spoken in a dialect local to the Kansai (Osaka) region of Japan. It literally means “make something good and use it to compete.”)

There is a person who is moved by such words. That person is Jun Takeuchi, the General Producer of Resident Evil 7. Takeuchi has two trains of thought: 1) to “work hard, fight hard,” as Tsujimoto says; and 2) to solve longstanding issues present in the Japanese game industry, that is to say the increase of game development costs and the training of human resources. Takeuchi aims to foster a more efficient development environment, and above all else, to cultivate the people who will be in charge of the next generation.  Ready the development environment, cultivate people the next generation, and “work hard, fight hard.”

It’s only natural that Kawata, the producer of Resident Evil who has watched over the series and who was was brought up at the company known as Capcom, shares the same sentiment as Takeuchi. Of course, no one knows at all if Resident Evil 7, with its considerable transformation, will be well-received by current fans of the series. This is why Kawata has paid so much attention to the reactions of the game immediately after E3.

The results are as follows: the conference reaction was filled with shock and happiness. Various video sites saw uploads of “reaction videos” featuring fans as they reacted to the announcement and trailer of the game. These reactions of fans jumping up in glee became trending topics themselves. The downloadable demo also invited many reactions. There were certainly also voices that expressed confusion at such a drastically altered Resident Evil. However, there were more impressions to be heard.

“It’s so scary I can’t progress forward.”
“The sound of my very own footsteps is scary.”
“I can’t go to the bathroom anymore.”

There was only one viewpoint that they all shared: “This is really scary.” This was the reaction Kawata, Takeuchi and all the development staff were hoping for.