BIOHAZARD 7 Inside Report 04: Just One Person’s Criterion of Judgment 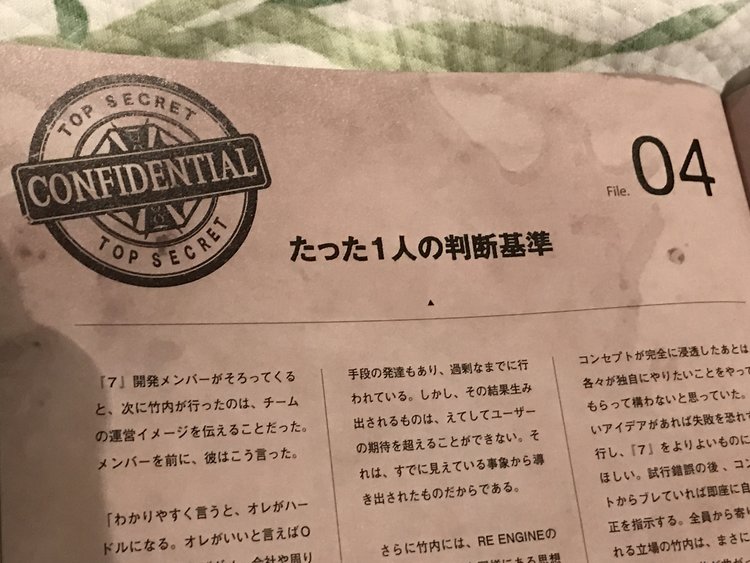 When the members of RE7’s development team were assembled, the next thing Takeuchi did was communicate how the team would operate. He stood in front of everyone and said:

“Simply put, it is me that is your hurdle. If I say something is good, then it gets OK’d. If I say it is bad, then it is not OK’d. Do not worry about what the company or anyone else around us say. Above all, I want you to do the job you are supposed to do.”

These words, crude as they may sound, were rooted in deep reasoning. Planning a “product” involved a company gathering a large amount of data that answered questions such as “what do users think? What do they feel? What do they want? What direct is the marketing heading in?” There have also been rapid developments in data gathering through use of the internet. However, what tends to occur is things that get produced end up being unable to surpass user expectations. This is because these products are guided by phenomena that is already visible.

Furthermore, Takeuchi had the specific set of beliefs from when he began development of RE Engine. When people attempt to make something big, they have a tendency to seek the advice of many others. However, that does not necessarily always lead to good results. The vision of RE7’s “heart” already existed in Takeuchi’s head. It would be ideal if everyone else on the team could grasp what that was.

In order to accurately convey what the “heart” is, Takeuchi placed a great amount of effort in sharing the concept of RE7 with all team members. Once that concept that completely ingrained, Takeuchi did not mind if each member did what he or she wanted to do. If someone had a good idea, then the person could, without fear of failure, implement the idea in order to make RE7 into a better product. After trial and error, should something be deemed to have strayed from the concept, then Takeuchi would give swift direction on how to fix it. Takeuchi, whom everyone leaned on, possessed a “heart that did not stray.” If the heart was in perfect shape, then the staff need not worry about the company, others around them or anything else. This was called the “Takeuchi Criterion.” (Translator’s note: In Japanese, the words used are “オレ基準” which literally translates to “MY Criterion” (from Takeuchi’s point-of-view). This is meant to underscore the supremacy of Takeuchi’s decision-making over all else in the development of RE7.)

The development team had no time for kick-off formalities; the very first thing they did was produce a concept movie, of which there were two objectives. One was to allow its production to share a stronger vision of the concept with the team members and confirm their understanding. The second was to allow people from outside the team to know and understand what kind of “Resident Evil” they sought to create.

Production Studio 1, led by Takeuchi, is one of Capcom’s development divisions. In order to advance to a formal stage of development, they needed  the approval of several management teams. Naturally, these management teams needed to understand and agree with the type of game the team aimed to create. Furthermore, advancing to the formal development stage would serve as the point when the scale of the team increases beyond its current number of 10-some people. By watching the movie, newly joining members could quickly understand the concept of the game.

The early core staff members visited famous haunted houses and ruins in order to understand just what horror is. When Nakanishi, the Director, began volunteering members by calling to them and saying, “Let’s test our courage out,” Takeuchi had a good feeling the project would be successful. Every member shared the vision of the concept and wanted to take it even further by expanding it. This was the very image of the development team Takeuchi had in mind.

At this point, two years had passed since the release of Resident Evil 6. Everyone had their own feelings regarding the Resident Evil series, and even stronger feelings toward the numbered title that would succeed 6. Those feelings flowed strongly as if they were coming out of a dam that had been sliced open. As an extra anecdote, when asking members about the state of the development team at that point, they would talk about how they enjoyed activities like exploring ruins.

The concept movie was completed in about a month. It was the end of March 2014. The movie contained footage of being lost in an ominous, claustrophobic residence before the viewer is scare-shocked by one component at the end. The video was just under 3 minutes long. However, contained in those 3 minutes were the thoughts of everyone on the development team. What is horror? These 3 minutes were the result of all the staff pouring all their strength into the “heart” that Takeuchi had built up.

If someone who has played the Resident Evil 7 Teaser: Beginning Hour released in June 2016 were given a chance to watch this concept movie, they might see the construction of the residence and especially the atmosphere and air of the environments and experience plenty of déjà vu. Even though the concept image movie was created in March 2014, the concept of RE7 had already been solidified by then. The vision was shared to the team without getting blurred, and continued to be upheld unwaveringly.

However, the management teams who saw the video did not all have the same positive reactions to it. Some saw the video and were genuinely worried, confused or something else. This reaction is perhaps to be expected. It is actually more difficult not to be confused by this video because it went down a path completely different from anything before it. During the presentation, Takeuchi explained that there was no need for online, nor an open world. The concept was for a narrow world that was deeper than anywhere else. If something truly frightening was made, then it would naturally spread from there. The first Resident Evil followed that pattern, did it not? That was the essence of Resident Evil.

The management team was perhaps moved by Takeuchi’s confident appearance. The project was successfully approved.