Please use this thread to submit any and all news so we can properly push it to the front page once approved. Please include all original sources. Enough tips and we'll consider adding users as official news posters on the front page.

Do NOT discuss news in this thread. This is for submissions only to push to the front page.

Please DO feel free to create new threads for the news within the forums so everyone can discuss it.


Universal Studios Japan has once again announced the development of a new escape room game, that is based directly on the latest title Resident Evil 2.

Biohazard the Extreme throws players into the most intense period of the Raccoon City outbreak — at least that’s how the setting seemed to be. Customers availing for the experience will play the role of a member of the Racoon Police Department. The objective is the same as always; escape your out way out of an obstacle course towards the finish mark using whatever resources or strategies you might need.

Read the whole story at Z6Mag.com


Capcom has announced a new four-player co-op Resident Evil game, but there’s one catch: you have to go to Tokyo to play it.

Capcom has revealed a new VR Resident Evil game, called Biohazard: Valiant Raid. But unfortunately, it’s only available to play at one arcade in Tokyo. 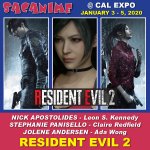 The survivors of Raccoon City during the events of Resident Evil 2 (2019) will be in Sacramento at SacAnime Winter 2020 on January 3-5, 2020. The weekend, most importantly, will feature Nick Apostolides, Stephanie Panisello, and Jolene Andersen as guests.

Nick Apostolides plays Leon S. Kenndy in Resident Evil 2(2019). He also was Henry in The Suffering and Charles in Life is Strange 2.

All three will be participating in a free autograph session SacAnime Winter.

This will be an awesome event for all fans of both anime and Resident Evil. Tickets can be purchased here.

SacAnime’s official hotel is the Hilton Arden West located at 2200 Harvard Street Sacramento, CA 95815. SacAnime’s Group Rate is $129 per night (plus taxes) and parking is $3 per night. Book your room by June 30th and you can purchase VIP tickets for $2 each. Limit one ticket per room night booked. You must book your ticket(s) by July 1st in order to take advantage of this offer.
Prices go up on July 1st!
Click to expand...

There is a PC mod for the original version of “Resident Evil 1” that allows you to play through the whole game as Barry Burton.

Resident Evil – Barry’s Mod launched for PC on the 30th of June this Summer (the mod is made by Aydan Watkins), and version 1.6 is out right now (v1.6 was released just the other day):

“Resident Evil – Barry’s Mod. This modification to the PC version of Resident Evil allows you to play through the original game campaign as Barry Burton but with many changes to the game including new item and enemy locations, story and much more.” – Aydan Watkins

Mat Piscatella, a well-known analyst at the SuperData Research group, conducted an interesting survey in the world of horror video games, drawing up a list of the most successful names found in this genre from 1995 to the present.

The research, which in any case is limited only to the US market, revealed without too many surprises that it was Resident Evil the franchise most appreciated by players during all these years. The ranking, in fact, is led by Resident Evil 5 in first position and Resident Evil 4 in second, while the excellent Dying Light (which will soon receive a sequel ) goes on to win the lowest step of the podium. There are also excellent results regarding Resident Evil 2, Resident Evil 7: Biohazard, Dead Space 2 and The Evil Within (digital sales are not counted). You can take a look at the complete ranking through the twitter we showed you at the bottom of the news.

In a subsequent post, Piscatella pointed out that Resident Evil 2 would rank in the first place if we add up the sales of both the original, published in 1998, and the recent remake arrived this year. The reworking of the horror adventure of Leon Kennedy and Claire Redfield – continues the analyst – is continuing to sell very well, and is approaching in a surprisingly rapid way the sales of the entire lifecycle of the original Resident Evil 2.

Not sure if this belongs here, but I have to share it. Biohaze mentioned! :] A call recently went out to hardcore Resident Evil fans in Japan to playtest a new product, sparking hopes for an RE 3 remake or RE 8.

Everyone, “Capcom Open Conference RE: 2019” will be held in Tokyo and Osaka in September. We will provide technical explanations such as the evolution and improvement of the in-house developed game engine “RE ENGINE”, how to use it in each title, and implementation examples. Please check the following site for details. 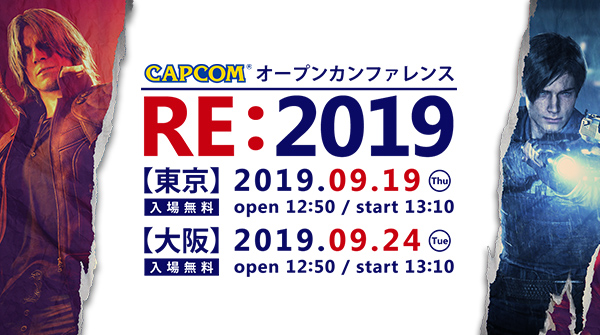 
Capcom Co., Ltd.
will hold a conference on game development information sponsored by the Company on [Tokyo] September 19, 2019 (Thursday) [Osaka] September 24, 2019 (Tuesday). Technical explanation from both system / application perspectives, focusing on the evolution and improvement of
“ RE ENGINE ” , an in-house developed game engine, as well as usage and implementation examples in “ Resident Evil RE: 2 ” and “ Devil May Cry 5 ” The
It will be a free conference, so if you are interested in the program, please join us.

I hope they do more than just talk about the RE Engine.

The man who killed Albert Wesker

Nice, now that they are talking about the Engine they can finally fix that big screw up they've made with Chris.
C

Gamescon still has another 3 to 4 days left. I know last night, nothing really happened.

News dump only please. Use or create threads to discuss.

A new Resident Evil game is in development and set to be revealed imminently, publisher Capcom has said.

The game has a working title of ‘Project Resistance’ and a teaser trailer will be released at 3pm UTC (4pm UK/8am PST/11am EST) on Monday September 9.

Japanese residents can register for a chance to test the title at Tokyo Game Show 2019, where where Capcom will be showcasing the game from September 12-15.

The publisher recently announced record first quarter profits on the back of strong digital sales of the latest instalments in its core franchises, including Resident Evil 2 and Devil May Cry 5. You can now get RE2 style body armour. If you want to take your Resident Evil cosplay to the next level then you may be interested in Capcom's latest release, a full replica version of the
www.thesixthaxis.com

http://instagr.am/p/BmjZ4xqnpcR/
A professional stunt performer is bringing a hefty lawsuit against the producers of the latest installment of the “Resident Evil,” series after she says she suffered “horrific” and “catastrophic” injuries from an on-set motorcycle accident.

This was just announced for some reason. Project REsistance might be hiding even more up t's sleeves, but for now we'll just have to settle for leaks. Luckily, this is Capcom we're talking about.

REPORT CLAIMS CAPCOM IS PUSHING AHEAD WITH LATEST REMAKE, FOLLOWING RE2 SUCCESS

Capcom will release a remake of Resident Evil 3 in 2020, a new report has claimed.

YouTube channel Spawn Wave reports that Resident Evil 3 remake is in active development at Capcom, which matches what VGC has been told by a number of sources.

Resident Evil 2 remake released in January 2019 – 21 years after the PlayStation original – and has been a very successful title for Capcom, with sales approaching 5 million units.

It’s likely that the Resident Evil 3 remake would be able to reuse at least some assets from that title, as well as mechanics and engine work, making a release at some point in 2020 possible.

The original PlayStation version of Resident Evil 3 released the year after its predecessor. The 21st anniversary of that title will be celebrated in September 2020.

The multiplayer spin-off’s announcement in September forced Capcom producer Matt Walker to address fan concern about the future of the franchise as a traditional single-player game.

“It’s totally valid that people want more of that quality core experience offered in RE2 and RE7,” he said.

“My take – we as a company need to continue to branch out and try to offer up new gameplay in addition to refining the experiences people expect from us. If we just continue to offer up the same thing over and over again, people will gradually lose interest with what we’re making.”