Is this Michael Does Life in the picture?

I really liked the trailer. As I wanted, there is more focus on folklore than there was in Resident Evil 4.
C

I take it you're subscribed to his channel. He recently made me a moderator. Right now, he cannot upload anything on his regular account. It has something to do with the recent stream regarding Apple.

I didn't understand much of what Capcom showed off. It was basically slightly more than what we seen already. Sadly, no release date was revealed, but they are likely saving that for Tokyo Game Show...

Were you expecting to see anything about Silent Hill tonight? ?

Meh. Nothing interesting in this trailer tbh.
C

Also, why does every scene look like it's from Ethan's point of view all of the time? Like, really. Why every single scene, Capcom?
R

He says that the moroaice we saw in the castle will appear completely naked before transforming into the form of spider.

It's time to call the morality police!
C

For some reason, I didn't even think about it, but mother Miranda, to whom the villagers pray, may be a militant defender with a sword and shield, whose monument can be found in the village. Note also that her shield shows the head of a goat, and the villagers wear goat skulls as amulets. There's definitely a connection.

This woman is also depicted on the castle gate: she challenges the devil, who seems to devour the baby. This may tell us that the architects of the castle tried to perpetuate the feat that she once performed. Once she saved people from horror, thanks to which her image is associated with the defender, so the villagers have been praying to her for generations.

But who is this Miranda? And what kind of horror once threatened people in Romania?

You know, I have a suspicion that this Miranda may have been both the founder of the castle and the founder of the Spencer family. Miranda Spencer could challenge the parasites that ran rampant in this area centuries ago. Since then, only fossils could remain, which were later used by Umbrella and The Connections.
C

Where can you actually watch Tokyo Game Show coverage online? Thus far, I cannot find much live stuff about it.

Tomorrow is going to be huge with Resident Evil Village. Not only that, but as you know, there have been so many rumours going around this year that the Silent Hill franchise could be returning, so Tokyo Game Show seems like the kind of event you'd be likely hear about that, considering that it's supposedly a soft reboot of sorts, that is meant to be being developed by a Japanese company alongside Sony publishing it. Konami is scheduled to have slots both tomorrow and on Sunday.

I'm really excited, but I hope it's not going to be all for nothing considering all of these potential clues and whatnot.

Watched this recently. Again nothing interesting.

Also ı still dont understand devs' desire to reuse ethan. His story was finished in re7; why is he coming back? He looks like ark thompson now and he will fully be an ark ripoff. Oh and ı dont understand the decision of hiding his face either. Especially when modders already figured out a way to see his face in re7.

According to devs from this video; all they care is scary atmosphere, pretty graphics and realism obsession. Sounds to me like this game will also be generic horror like re7 was.

Well i guess we can expect special things are coming to celebrate the 25th aniversary of the saga.

Oh yeah; ı forgot that image. Thanks for posting. I dont think it's as good as previous anniversary image though.

Also ı have a few questions about it:

1. Why is hunkfield used? Why not use re8 chris?

2. Why are leon and jack baker in the middle? Jill and nemesis should have been in the middle along with carlos between them.

3. Where's birkin? I dont know why his 1st mutated form isnt used instead of jack.

4. Why not use a normal t-103 instead of its mutated form in the reimagining which looks lame?
R

I really liked the background music at the end when the director started talking about Ethan. Judging by the tone, it may have something to do with the finale. It might be something dramatic.

I think of all the villains in the series that were in the series, Oswell Spencer was treated the most unfairly. Come on, he's the founder of Umbrella, the root cause of everything in this world. Even on a conceptual level. It is his mansion, which is a mirror of his soul, character, taste, and so on, that is the reason why the series is associated with the Gothic genre. Turn him into a plot device for Albert Wesker? Jeez.

I hope that even though he's been dead for a long time, we can learn more about his character and the history of his family. I think this is a good opportunity to show such revelations.

I also really like this animated book with a fairy tale. As I said, I know a lot of fairy tales called The Village. I understood perfectly what the authors wanted to do: to capture this tone and spirit of folk horror.

Renders of the characters look very cool. Chris looks amazing. Ethan is also cool, although his face is probably still hidden for the right moment. It's a pity they didn't show a better third character. I'm interested in who this woman is.

In general, everything looks very cool. I really care about the setting that they chose, because I grew up in Eastern Europe, read Dracula in my youth, and just a huge fan of the remake of the first game and Resident Evil 7. It's like all the stars in the sky converged. If they don't repeat the problematic parts of Resident Evil 7, then Resident Evil Village has the potential to become one of my all-time favorite games in the series.
C

OK. So Ethan is the main character, seeking revenge, as well as to gain some answers as to his wife's demise, or whatever. And Capcom showed off some art image of him, along with Chris.

Here's the thing: Capcom, if you're gonna do that, then at least show us his face in certain key cutscenes. If only for that one big moment. Jesus!

I'm glad we'll get a section where we'll be playing as Chris. So I heard anyway, via some rumour. But hey, Chris is our man. It's a giving that he'd be playable anyway. But I just want to know why the heck he is a changed person. It's like something has triggered him into becoming this alleged "villain" that is not characteristic of his old, zombie hunting self. And I think I know what that is. But I won't say it. Just wait and see what unfolds in the near future.

Oh, and for heaven's sake. Please, Konami. Please show us something about Silent Hill over this weekend.
R

Some fans are already complaining about it. I think people are more concerned with the "hero" label than the character development itself. It's not hard for me to imagine a complex context in which Chris would need to do shit that looks like dark shit, but that doesn't contradict the character's personalization. The only context that fans know is a good Chris who saves the world, and a bad villain with a "deep" motivation. No matter how much the authors write Chris's monologues about how killing criminals and monsters that were once people is not something heroic, it doesn't matter until we are shown a more complex context in which there are no clear tasks like saving the world and there are no clear moral guidelines that show who is right and who is wrong.

Now even a little girl can become a bio-organic weapon. This girl is brought up this way, taught to kill, not put any morals in her. So when she wants parental love, she hurts others, even though she doesn't know what she's doing wrong. Chris will kill this girl because she's a bio-organic threat. This is what Chris always does. From the alternative point of view of a person who is morally superior, this can be a real atrocity. If people were stronger, they could give her a second chance, teach her to deal with her feelings, teach her to socialize, and so on. Because she's not a zombie, but a person. But Chris, I'm sure, will not agree and the law will be on his side. This does not mean that he is a villain. This is a pluralism of opinions. A context that can be viewed from different angles.
C

Don't forget that Emily is also a major character. Her segments sound interesting, as she's going to be walking in a dark cave, I believe.

mert20004 said:
Oh yeah; ı forgot that image. Thanks for posting. I dont think it's as good as previous anniversary image though.

Also ı have a few questions about it:

1. Why is hunkfield used? Why not use re8 chris?

2. Why are leon and jack baker in the middle? Jill and nemesis should have been in the middle along with carlos between them.

3. Where's birkin? I dont know why his 1st mutated form isnt used instead of jack.

4. Why not use a normal t-103 instead of its mutated form in the reimagining which looks lame?
Click to expand...

They simply opted for a lazy collage that displays character art from the last 3 RE games released I guess? I think the prime development team of RE games at Capcom is under a lot of pressure with Village development, having to find a way to make Village work decently enough on the PS4 and XONE, since they said they still can't promise its going to go well, although I think they oughta do a nice next gen version first, since I think a down-port for the previous gen will demand considerable work and definetly extended time of development. But if the RE Engine works on PS4 and XONE before why is it so difficult, I guess the Village Engine has gone through improvements such as Ray Tracing, plus the powerful GPUs and also makes use of the faster load times. That said if the game gets a cross gen release the older gen could end up having a few loading issues?
R

I found it somewhere on the Internet. It looks gorgeous: 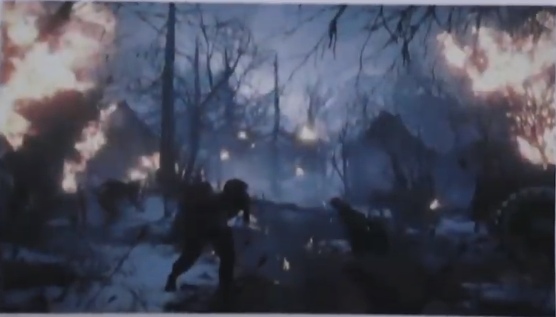 This game may as well have been the RE4 remake in the first place, from all I've seen up to now. It sounds exactly like it wants to be RE4 anyway. Even the villains are Saddler quality bizarre, although that depends on what you like, and the series has always had unusual enemies.