RE:4 Showcase Art, Images and Video

Makes sense that it may be something to do with the video being made for HDR, hopefully it looks good on SDR by release. Otherwise the visuals look crazy good. The castle in this shot looks amazing

Good find on that laser sight! I hope it's for all weapons, not just the pistol.
Click to expand...

That shot blew me away more than any other. It almost looks like Demons Souls, I can't wait to see the world come to life and take it in area by area at a slow pace. Having recently played the re4HD mod, it's amazing how much detail went into the original and I think it'll be like reliving that release in 2005 all over again.
C

All in all, I was impressed with both Capcom and Konami this October. If they play their cards right, fans will definitely take to Konami again after doing nothing with the IP for a decade. Capcom has been on a roll, despite what you may think of their games at times.

I am just glad Silent Hill is back at long last. It has been too long.

Although admittedly, I am not a fan of remakes. I prefer companies to offer up something new. But it is just the times we are living in. Remakes make a ton of dough in the industry.
R

I really like how the design of the Chainsaw Ganado has been changed: 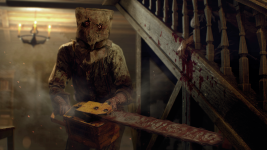 This is the case when the change serves the narrative of the original source material instead of offering something completely different.

A Chainsaw Ganado is distinguished from an ordinary Ganado by the better assimilation of nerve structures by the Plaga parasite. As a result, the host's hormonal background, cognitive functions, and so on were altered, which made them more robust and aggressive, since they are rather wild animals living by impulses.

Of course, the faces of such Ganados were injured, which is why they wore masks. Or something else that hides their faces. But you can hardly make such a conclusion based on the original design, unless you meet a female host.

The design from the remake emphasizes these details, showing us the deformed proportions of the face, reminiscent of the assimilated parasite itself: 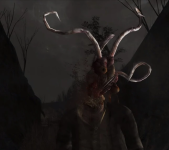 Not to mention the eyes that almost fell out of their orbits with burst capillaries, which indicate high pressure, which is also true of the original game's setting. 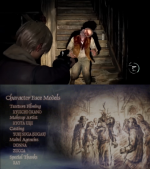 I absolutely adore you for this find, just wow!
C

I hope the Bella sisters will still be in the game. You fight them to get a key. They also appear near the barn.
R

"But just take a look at this!" 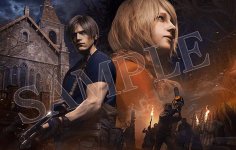 As expected, at night the eyes of Ganados don't burn with hellfire, as it was in many alien fiction. 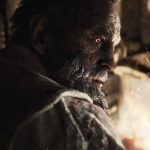 Judging by this screenshot and the Lycans from Village, the pupils will only reflect light, and dynamically, not statically. Anyone can try to lure a Lycan into the house and see how their eyes begin to "glow", in fact simply reflecting photons onto photoreceptors, so that they can navigate in the dark.

There was no explanation for the phenomenon from the original, when the phenomenon from Village and the remake is hybridization. Since the parasite also assimilates the optic nerves, this is its gene transfer mechanism, which allows crossing organisms, I think.

And in general, the new designs of the Ganado and the Plaga parasite reminded me of Damnation: 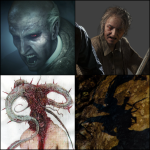 Probably, due to the fact that this is a late iteration of the parasite, they focus on it in order to recontextualize the setting. Maybe for the same reason Leon will see hallucinations a couple of times, besides that bad dream.
C