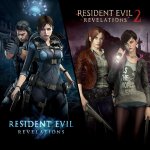 I want to create this thread to make one that's more general for rerev games to be discussed together. What's your thoughts about them?

I'm personally not the biggest fan of them even though they are alright. I enjoyed them and played them for some time but they dont catch my interest these days really. I didnt even play them in my last marathon.

About the 1st one; ı personally find its existence unnecessary. It's another prequel released after re5 lin and darkside chronicles, compared to reorc and re6, it doesnt seem as unique additions as those games that are also released in 2012.

As for 2nd; ı like it more than the 1st one and ı enjoyed playing it more as well. However at the same time, ı also have more disdain for it. The reason for this is the story script is very butchered due to being altered after it was done. Idk why this happened but it seems to have happened. I'm not a big fan of some story decisions for characters in these games, especially the 2nd one.

Another reason why these games dont feel necessary is due to them giving me the feeling that capcom want to make them in order to please the fans who dislike the more action oriented nature of re5 as well as re6 while wanting more horror. I never had any action complaints for those games really, ı think they have plenty of horror elements for what they are. I have no idea why would anyone would say " A game has too much action. " while presenting that as a complaint. When these games are praised, ı've also seen re5 and especially re6 getting bashed at the same time as well. I'm not the biggest fan of this behaviour.

I would like to know more game development plans about these games.

I remember some about the 1st one. There's a trailer where chris and jill point their gun to them. Another chris talks at the end. I also know that rachel was supposed to be a man, ı think his name was richard.

As for 2nd; the reason why they wanted to make it seems to be that rerev received a better general reception than re6 which was extremely divisive within the fanbase. I've got the impression that capcom wanted to add more canon story content for re6 but instead of doing that; they decided to ruin that game's potential by using some of its planned ideas for rerev2 while others get discarded. So basically rerev2's existence seems to be due to re6 hate bandwagon.

According to news bot; rerev games seem to have the worst localization too. I still cant believe how re6 can be fine in terms of localization but rerev2 can be extremely butchered in this aspect.

But anyway; feel free to explain your thoughts about these games.

I actually love both of them to death. REV1 is one of the hardest Platinums I've had to do. I remember being sorely dissappointed it was on 3DS, I bought a DS at the midnight release for that and Mercs3D. Super happy I can play it on PS4 now. Has a great atmosphere and locations.

I very much prefer REV2 though, but only played through casually twice. Raid Mode is soooooooo great in REV2, I can't rave about it enough. Been meaning to go through the main campaign and Raid Mode again soon.

I like both of them a lot. They're above 6, 7 and 8 for me, and I enjoyed all three of those games. Heck, maybe they're even above 5 on my list, or at least on par.

I like the atmosphere in both games and the new characters. I really like Parker and Moira and wish we'd see them again. More lore is something I always appreciate, and Raid Mode is just too much fun. I also think the gameplay is pretty good and I thought some bits of both games were creepy enough.
I could keep writing about these games, but I think it's pretty clear I love them.

Tricella said:
I like both of them a lot. They're above 6, 7 and 8 for me, and I enjoyed all three of those games.
Click to expand...

They really are true successors to RE4 and RE5. They feel the same.

Tyrant said:
They really are true successors to RE4 and RE5. They feel the same.
Click to expand...

Huh, I think you hit the nail right on the head there. That's exactly it.

I dont like them that much either. I dont really remember the 1st one but about Revelations 2; I enjoyed Barry's episodes but I'm not a big fan of Claire's. She wasnt done justice in this game IMO.
O

Rev1 will always be ome of my favorites since it was one of the first games I played. I loved the gameplay, the story structure wasnt something I was used to at the time and it felt like a breath of fresh air. I loved the designs of the enemies and the fact it was on the 3DS was a huge selling point for me, since I like playing games on the go. The raid mode was fun for me, and didnt feel excessively repetitive.

Rev2 is a bit different. I loved seing Barry again, Claire being back was nice, though her character was butchered. The multiplayer aspect was... a bit uneven. Sure both are important for gameplay, but everyone I played with didnt want to be Moira or Natalia, and it was just easier to do it myself. The designs of the uroboros enemies felt like a rehash of the Ooze from Rev1, though the gameplay was mostly kept intact. The Genesis function is still there, but I think Rev1 did it better with the circle around the items, since trying to find a flickering light is annoying. The story is fine, but leaves a bit to be desired. I kind of wish there were more chapters or some of the chapters a bit more broken up, because a few of them either drag on or take a while to get through them, even if you ignore every item. The raid mode felt more like a drag, and I didnt care for the upgrade system in it.
You must log in or register to reply here.
Share:
Facebook Twitter Reddit Email Share Link
Top Bottom