If jill returns to a new storyline set after re5, ( Idk when it would be set but it's more likely that it would be set not only after re6 but even revillage too. ) do you think it will have anything to do with her storyline in re5?

Claire returns in heavenly island manga but she never mentions her infection with t-phobos in rerev2 at all, even when checking a picture of alex. She seems to adapt to it but unlike moira, she doesnt conquer her fear through that at all. It's like ı'm supposed to believe that claire became extremely emotionless, to the point of acting like a robot instead of a normal human, just cause she's more experienced. I cant really agree with that at all. Was the virus completely obtained from her body or did it disappear with no explanation or something?

It's possible that jill's ( if she ever will at this point... ) return would be like that and it might be seen as disappointing to many. After breaking from p30; she doesnt seem to show side effects from it at all. She collapses but still teams with josh while showing her skills in gameplay well. I'm still not sure how that device works. I fail to see why it couldnt be expanded to other test subjects captured by tricell. It only revolves around jill. I'm not against seeing her more optimistic like how she still is in re5 but ı dont think they will do a ptsd storyline like chris in re6.

Idk if she can change her hair color or something. They seem to plan her becoming blonde way back in recv. I learned that she seems to dye her hair on purpose in an attempt to not get discovered by umbrella or something.

I'm quite not sure if she will return with blonde hair or she would prefer to not have one like wesker in order to forget her nightmare. Maybe she might dye her hair to change her hair color.

I find it questionable that jill isnt shown mentioning her infection in raccoon by nemesis to chris. I'm surprised bsaa didnt check her body to see the dormant t-virus in her body. It seems that they wrote re5's story in a way to benefit wesker rather than surviving protagonists. I dont think jill's antibodies were needed for his plan at all. I would make it in a way by combining progenitor with plaga or something. I still find it weird that they go back to past story origins in re5 only to not make a good proper use of it due to trying to make plaga more relevant.

Tricell has all those test subjects and ı'm still supposed to believe that they really needed to make jill wesker's test subject in a forced way? I still dont think the weakened progenitor strain which became uroboros would so called " redeem " humanity well by evolving the ones with superior genetics. I used to favor wesker in re5 over his other appearances but nowadays ı just dont think take him seriously in any capacity.

The only time where it worked well imo was sherry and manuela. Considering they were protected by the government.
C

I mentioned Jill a few days ago as well. I've been thinking about how these newer games have been deviating so far from the origins of the franchise. Jill must be getting on a bit by now...

As I so often say, and you do too, the stories are not well interwoven anymore. They probably put Chris in 7 and 8 so fans wouldn't blast Capcom for making an "indie horror game" without one of the main characters. Not that it's a low budget game. But it is reminiscent of those games on Steam.

This becomes more and more likely with the DLC set to end the Winters saga now. I would love this.

If jill and claire would return together; then ı feel that using them together in a storyline against natalex would work. It can also allow jill's ptsd to be explored after re5's events. If they would decide to bring back t-phobos in a way for jill to conquer her fear like this; then that would have been quite interesting. I dont think her antibodies, if she still has any, would work against that.

If another character needs to return; then ı'll take barry. I've seen people wishing for leon-jill team up but ı dont find that interesting at all. I wished jill was in rerev2 instead of claire who would be in re6 along with ricky as a way to follow up from marhawa desire and ı also would have preferred barry's family to not be put into danger through a forced way. Alex could have received a much better conclusion through this where jill would defeat her once and for all. If natalex would return as grown up; then ı think giving her the conclusion through a story revolving around jill and claire would be quite interesting imo.

If re engine 2 and 3 being simulation experiments through resistance created by alex rather than wesker creating this through his umbrella technology is true; then it makes more sense to do this.

I used to really wish re6's story to be followed up upon due to the game's story being much better concluded than previous ones as well but ı'm not interested for that anymore. I wished both als received their proper conclusion already. Idk how much the storyline is gonna continue...
C

That's shocking how Jill has been absent from the canon since 2009 (outside of side story titles and the third remake). And while I get that there probably isn't much more she can do, and she had been infected, she is one of the franchise's ultimate heroes. But they use other characters with powers from time to time. Although in Rosemary's case, I think this is to benefit her in some manner. I'm not sure what the DLC is about, but I so God to hope that Capcom moves on from this fantasy hockum, because I'm just not a big fan of it.

I much preferred the franchise when it was the George Romero style era, with zombies and other creatures. Not this Van Helsing, or The Hills Have Eye crap it has been since, what? 2017?

Hell, even RE4 had fantasy enemies first. Zealots. Ogres. Then I was expecting Boris Karloff to jump out and say, "Friend!" LOL.

But you know what I mean. Some people like that Capcom experiments and has different ideas. But then it starts to go haywire when they stray off course from how the series began. Gets to come across as being pretty stupid.

I would love a game featuring Jill and Claire working together but it has to be fun and light hearted. With some fight scenes like this: 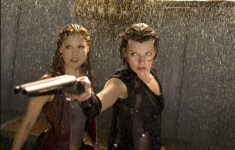 MrSpooky said:
I would love a game featuring Jill and Claire working together but it has to be fun and light hearted. With some fight scenes like this:
View attachment 1848
Click to expand...

You also would like to see patricia ja lee and alyson court to return to voice jill and claire right? I wished they voiced those characters during rerev games and re engine entries. I dont care much for anderson's movies but claire's design is one of the few things ı like about them. Helena's asia outfit in re6 and claire's heavenly island outfit seem to be inspired by those. Better than the generic tank top design for mia, zoe and claire in re engine 1 and 2.

I still find it that birkin's and hunk's voice actors from umbrella chronicles return for re engine 2 and yet for the returning playable protagonists; they dont have their voice actors returning. I wished alyson court, re6 voice actors and patricia ja lee returned to voice the returning characters during re engine raccoon city entries.
Last edited: Oct 19, 2022
C

I hope besides what we know about, that they will perhaps surprise us with a new game. Although I kind of wish they didn't go into depth about the Village DLC too much, as these clips and stuff intend to take from the surprise element. If you know what's in store, you know the section it will roughly occur in. You know? So it's always best to leave the eye candy out until we get to play it.

We had quite the wait as well. What has it been, really? 16 months or something?

But yeah. Silent Hill and Resident Evil, two days in a trot.

mert20004 said:
You also would like to see patricia ja lee and alyson court to return to voice jill and claire right? I wished they voiced those characters during rerev games and re engine entries. I dont care much for anderson's movies but claire's design is one of the few things ı like about them. Helena's asia outfit in re6 and claire's heavenly island outfit seem to be inspired by those. Better than the generic tank top design for mia, zoe and claire in re engine 1 and 2.

I still find it that birkin's and hunk's voice actors from umbrella chronicles return for re engine 2 and yet for the returning playable protagonists; they dont have their voice actors returning. I wished alyson court, re6 voice actors and patricia ja lee returned to voice the returning characters during re engine raccoon city entries.
Click to expand...

Yeah, Patricia Jay Lee is hands down the most emotional speaking voice for Jill Valentine but if we can't get those girls Id love to see Julia Voth, Sienna Guillory for Jill, and Ali Larter for Claire.
C

Bring back Jill. We have had enough of Chris and Leon stealing the spotlight. Or at least reunite these characters.