A lot of people say the genre of resident evil is survival horror but this isnt the case.

The actual genre of resident evil is action adventure or arcade adventure.

I discussed this with a friend of mine and he posted me some magazines about re1. After going through them; ı've found 2 instances where this was mentioned. I'll post them here below: 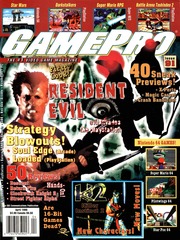 As you can see; " survival horror " isnt listed under the genre during these magazines. Action adventure or arcade adventure are listed instead.

If you know more magazines that list the genre of re1, feel free to share if you want.

Honestly ı dont like how people all these years make it sound like survival horror is a game genre when it's a capcom genre; it's not a real genre. I dont buy into the " It became game genre and replaced action-adventure as resident evil's genre. " either. Survival horror wasnt even used for all of the games, some games in the series have different mottos.

I remember seeing an article named " Re6 is death of survival horror. " . Another stupid game journalist shoving his opinions as fact. If action adventure replaced survival horror as game genre with re6; then wouldnt this be return to series' roots? And yet despite that; ı'm supposed to believe that the series returned to roots after re6 and not with that game instead which apparently betrays the soul of the franchise. Just cause survival horror replaced action adventure as game genre even though this doesnt make sense. Apparently common sense doesnt exist in fanbase.

I never liked " return to roots " statement that's made for games released after re6. How can they " return " to so called " roots " when the games never left from " roots " in the 1st place? They've always been in action-adventure genre, there wasnt really any betrayal like some people claim for re6.