Some Dino Crisis fans, Team Arklay, are working on a remake using Unreal Engine 4 and here's the first footages from it.


Initial report prototype You Have Mail:

RE's little brother. There's a strong possibility of a comeback.

There it is! Didn’t feel like Haze without a little DC love, other than SG’s avatar. ?

I’ve said it over and over, RE6’s engine was a blast to play and would fit DC going forward perfectly. A hair more action, fittingly for the series, while Bio retains the slower paced gameplay. I really hope to see something happen with Dino Crisis one day. RE Engine and dinosaurs would be horrific.

I whole heartedly agree with this article. Capcom's Next Reboot Should Be Dino Crisis (Please) - IGN

As Capcom explores which of its old series to revisit next, it's never been a better time to save Dino Crisis from extinction.

Capcom's Next Reboot Should Be Dino Crisis (Please)

With Resident Evil 7’s successful reinvigoration of the horror franchise last year and the upcoming remake of Resident Evil 2 looking equally terrifying, it’s safe to say that Capcom’s premiere franchise is riding high. Now that’s all well and good, but in their efforts to repair their favored series, Capcom are missing a golden opportunity to revive a few of their extinct titles, starting with Dino Crisis.

For those too young to remember the time when dinosaurs roamed the PlayStation,

Dino Crisis was a survival horror game from legendary director Shinji Mikami – one of the lead creating forces behind the Resident Evil series and, more recently, The Evil Within. Set on a remote island, Dino Crisis follows a special forces team’s attempts to capture Dr. Kirk, an archetypal mad scientist who had faked his own death and gone into hiding. Not long after landing, the team discovers that the facility has been infested by Cretaceous carnivores and has to battle their way off the island.

Dino Crisis was a critical and commercial success when it launched in 1999, even garnering an impressive 9.2 from a fresh-faced IGN. Despite this success, Dino Crisis is often thought of as nothing more than ‘Resident Evil with dinosaurs’. This description is a little reductive, but not entirely inaccurate. Much of Dino Crisis’ original DNA was lifted directly from the bones of Resident Evil, prominently featuring the iconic fixed camera angles, tense action, and obtuse puzzle solving that had propelled the survival horror series to glory.

Beyond these genetic similarities, Dino Crisis was so much more than Resident Evil in a prehistoric frock – it was an evolution of the formula. Velociraptors represented a faster, deadlier challenge than the shambling corpses inhabiting Racoon City. To combat this threat, Dino Crisis’ protagonist, Regina, could simultaneously move and aim her weapon. It seems like a quaint feature to boast about now, but at the time this was a massive deal. On the technical side of things, Dino Crisis was breaking new ground by eschewing Resident Evil’s traditional pre-rendered backgrounds in favor of and opting for a custom 3D engine. This new engine, combined with the clinical setting of the island laboratory, gave Dino Crisis a clean sci-fi aesthetic, in stark contrast to the grimy decay of Resident Evil’s Raccoon City. This futuristic vibe was carried through to its puzzles, which did away with shoving random items into statues in favor of the laboratory’s DDK lock system. It was hardly rocket science, but solving these ciphers made you feel like a hacker, which was all the rage in the ‘90s.

Throughout it all, the star of the show was undoubtedly the Tyrannosaurus Rex, who was running the whole super-persistent predator schtick long before Nemesis reared his ugly head in Resident Evil 3. After munching the squad’s Red Shirt in the opening cinematic, the T. Rex was a constant threat, smashing its head through windows and headbutting helicopters in its pursuit of a tasty, Regina-flavored snack.

Just a year later, Dino Crisis 2 burst back onto the gaming scene, changing up the gameplay formula completely and stepping out of the shadow of its older sibling. In the aftermath of an entire town disappearing, Regina and her cohorts were sent travelling through time to rescue any survivors. While Dino Crisis featured a few dinosaurs dotted about a modern-day laboratory, Dino Crisis 2 saw an entire town displaced and dumped unceremoniously into a Jurassic junglescape. 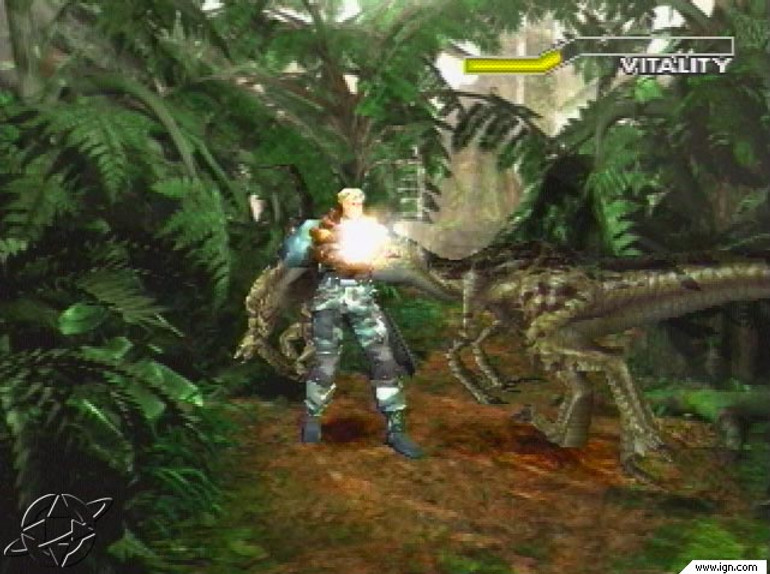 Dino Crisis 2 was very much the precursor to the Resident Evil series’ shift from horror to action with Resident Evil 4. Long before Leon was gunning down hordes of Ganado, Dino Crisis 2 had already abandoned the horror genre’s trademark spooky corridors in favor of bombastic action and explosive set-pieces. Featuring faster gameplay, hordes of dinosaurs, and an arsenal of weaponry that would make your average gun club blush, this high-octane sequel successfully crafted its own identity. The cast of dinosaurs was massively expanded upon too, with acid-spitting Oviraptors and ocean-dwelling Plesiosaurs joining the returning cast, including the indomitable T. Rex that once again pursued our survivors with unnatural ferocity.

Sadly, the series took an asteroid to the face in 2003 with the arrival of Xbox-exclusive Dino Crisis 3. Taking the action to space is rarely the fresh new direction a series needs, but Capcom made the bizarre decision anyway. Set 500 years in the future aboard a space ship infested with genetically-engineered super dinosaurs, this threequel abandoned almost everything from the series’ history. Combine the ludicrous choice of setting with a pitiful lineup of enemies and one of the worst cameras in gaming history and you get the ultimate extinction event for the Dino Crisis franchise.

This article was very insightful.

There really hasn't been a great dino game well over a decade.

It's shameful that the poor decision making of Dino Crisis 3 being Xbox exclusive and journeying to space really killed this once beloved franchise.

I still stand firm that this was one of the greatest moments in video gaming history.

I literally jumped off my chair in 1999 (and might have said 'mommy' but I don't recall).

This is more of an unpopular opinion lol but I really believe that Dino Crisis 1 is superior to any Resident Evil game of its time. To see people call it a "just Resident Evil clone" is a disservice to how great that game is. The music, characters, voice acting, story, level design, everything is just simply amazing. I would absolutely (heavily consider) buy the stupid Collectors Edition that would obviously have an over priced Regina statue.

If Twin Peaks can come back after all this time, then I will continue to remain hopeful about Dino Crisis. Jurassic World showed you can do a soft reboot/sequel and continue a successful dinosaur franchise. The box office alone should convince Capcom to greenlight another Dino Crisis game now that there's mass interest in dinosaurs again. Regina on the RE engine with realistic looking dinosaurs updated with what we know about them today. It would be the stuff of legends.

I've made a review of this some time ago. It was my first time ever to play it through. I only tried the demo back in the day. https://onemorelevel.org/2018/03/11/dino-crisis-ps-review/

Back in the day, I wasn't a big fan of the series. But they were still great games that had potential. Obviously not the one in space, which no one likes anyway.

It's disappointing how Capcom omitted it from E3 this year, along with anything to do with Resident Evil.

I found yet another video of this fanmade (Team Arklay) project of Dino Crisis.

Still waiting for that fateful day that a Dino Crisis reboot is announced. For about the last five years, every E3 a buddy of mine would say "this is the E3 we get DMC5!" and guess what? It happened. Now it's my turn.
C

Even if the third one sucked, Capcom could have easily treated that as a non canonical entry, instead of fully neglecting the series for this amount of years. Regina was in some Capcom game that doesn't even matter. The same with Fongling. We need to know if Regina ever saved Dylan and Paula, and no, I'm not counting Dino Stalker as the official sequel, damn it!

Don't be surprised if Capcom becomes agitated over this, gets it axed, then they choose to do their own remake, REborn style. Yep! I haven't played it yet, but it's on my list.

Although even as someone who isn't a fan right now, I think a revival is inevitable. With all the remakes/reboots/revivals lately, plus the demand for it and the performance of recent horror games, it's bound to happen.
C

Yeah. I know Capcom will more than likely reboot it. But to be honest, I'd much rather see a sequel, as Regina was supposed to rescue Paula and Dylan. Dino Stalker was a seminal follow-up, but it seems rotten to end the series like that. If Capcom revived it, could they not just make it a new game that serves as a sequel, but one that also absolutely ignores the third part in space? I'll be so pleased if they do this. However, due to the time between games, it is more likely we'd get a reimagining, reboot, or whatever they label remakes as now.

Very rough but looks neat. Kind of disappointed that they took the primal Carnage T-Rex and slapped it in there with Jurassic Park rex roars though. I guess if Capcom slaps the person making this with a cease a desist like they did with the daymare guys when they were making their own RE2 remake, we'll have our answer if a new one is coming.